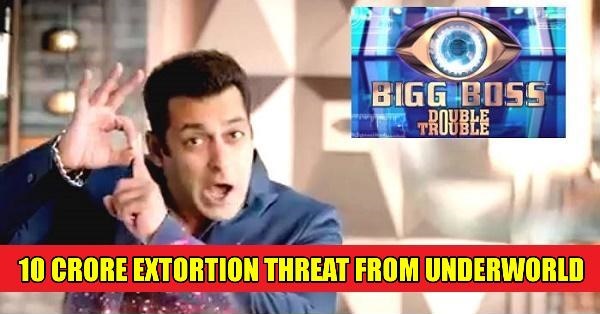 The producers of Bigg Boss were already perplexed and confused for facing the problem of decreasing TRPs and now the underworld has also decided to increase their problems.

As per the information received from very trusted sources, Mumbai Police has divulged that a small-time gang leader Suresh Poojari, who used to work with Mafia Ravi Poojari earlier, has given extortion threats to the producers of Bigg Boss, Endemol India, of Rs. 10 crore.

The FIR filed at the Rafi Ahmed Kidwai Marg Police Station in Sewri Mumbai stated that on December 8, the first extortion phone call was received by Mr Anand Chavan of the production group. Anand’s job is to shortlist and manage the participants for the popular reality show.

As per the source, “The caller feels that if the broadcasters and the producers can pay the star anchor Salman Khan 100 odd Crores as reported in media as remuneration they can easily let go the said amount and safe their lives.”

In the beginning, Anand thought that these are just prank calls so he ignored them but once he started getting death threats from IP calling services, he got frightened. It is also said that the gangster has negotiated the amount and was ready to settle at Rs. 1 Crore.

As per the source, Anand tried his best to make the caller understand that he is just an employee of the production group but the gangster was not in the mood to listen to him and he kept threatening him of severe consequences on not paying the extortion money.

Anand was made to believe that he was being watched and the calls also started getting abusive. This made Anand submit an official complaint from the producer’s side to Joint Commissioner of Crime Mumbai, demanding an investigation into the matter and providing him police protection.

These 10 Celebs Tweeted The Same Thing At The Same Time! Coincidence?
Facts About Mughal Rulers Every Indian Must Know