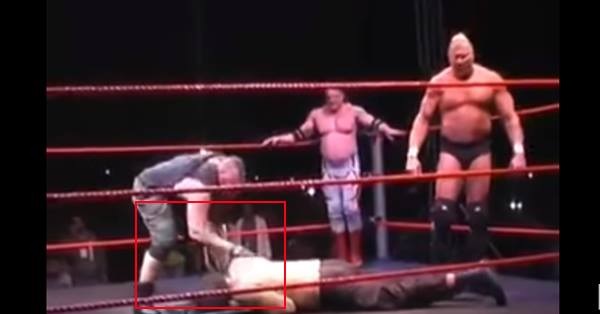 Dalip Singh Rana, a former World Wrestling Entertainment Wrestler, known as ‘The Great Khali’, his ring name was injured badly in a sporting event named ‘The Great Khali’ which was held at Indira Gandhi International Cricket Stadium in Uttarakhand’s Haldwani. This is indeed a very bad news for the fans of Khali and now, he is admitted to the ICU of Brijlal hospital. Before the event, Canadian wrestler Brody Steele had challenged Khali and stated that he wouldn’t spare him the ring and the same thing happened. During wrestling, The Great Khali got injured quite badly and the cut on his eye’s upper portion was constantly bleeding. There were serious injuries on his chest and head too. Actually, during the wrestle between Khali and Steele, fighter Mike and Apollo entered the ring and started attacking Khali with chairs. Owing to this, Khali fainted and fell down in the ring.
Soon as Khali fell down in the ring, the audience in the stadium got wild and police had to intervene in order to control the situation. They went to the extent of doing lathi charge. If you aren’t aware, let us tell you that before this event, Khali had signed a death warrant.

Watch the exclusive video of this event:-

This Guy Shares Funny Business Ideas To Become Millionaire With Random People & It Will Make You ROFL
WTF! You’ll Want To Throw Eggs & Rotten Tomatoes At These Reporters After Watching This Video