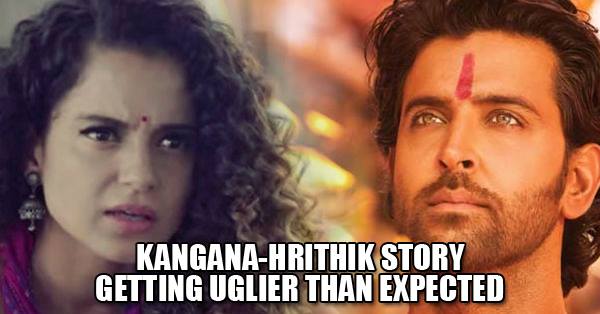 There have been a number of fights, some big too, in the Bollywood but the battle between actor Hrithik Roshan and actress Kangana Ranaut is breaking all the records. They both don’t seem to be in a mood to settle the matter on their own level and have taken it to the court. Though both the actors have refrained themselves from speaking over it in public, they have sent many legal notices to each other. As per a news channel, Rizwan Siddiquee, Kangana’s advocate, has sent a letter to the Commissioner of Police accusing the Krrish actor of “malafidely and mischievously” sharing private emails of Kangana with third parties.

These emails were sent by Kangana to Hrithik when they were in a relationship. Hrithik has been accused of sharing them with the intent to defame the Queen actress and harm her reputation. A request has been made to arrest Hrithik under IPC section 151, however Kangana has not filed an FIR against Hrithik till now. The letter also talks about the duty of police to probe the matter under section 149 and 150 of the Indian Penal code.

23 Mesmerizing & Spectacular Universities Which Are Not So Famous
So This Is The Reason Why Anushka Sharma Patched Up With Virat Kohli!