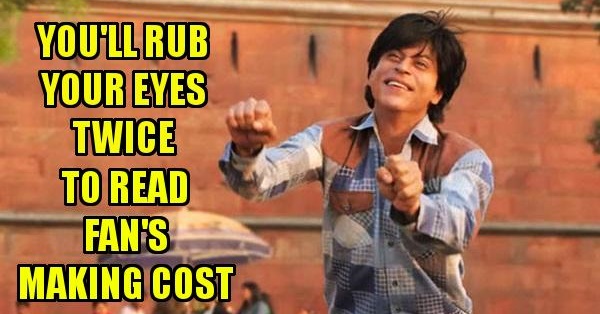 Shah Rukh Khan’s much-awaited movie “Fan” is released and is getting very good response on the box office. Both the critics as well as fans are praising King Khan’s performance in the film. He has done double role and played each of the characters very well.

The duration of the movie is 2 hrs 22 minutes and it has been produced by Yashraj Films and Red Chillies Entertainment. The movie has been released in 3500 screens in the country and 650 screens abroad. It’s been said that the total cost of the movie is Rs. 105 crore out of which Rs. 85 crore have been spent on production while Rs. 20 crore were spent on print and publicity.

The movie is directed by Maneesh Sharma and it also stars Waluscha de Sousa, Shriya Pilgaonkar, Deepika Amin, Yogendra Tiku and Sayani Gupta. As far as the music is concerned, “Fan” has no songs and “Jabra Fan” which got very popular among the King Khan’s fans is also not included in the movie. However, the background score of the movie is very good. The director has done a good job; however, sometimes it feels as if “Fan” is losing the speed but overall, the movie has been directed well and Shah Rukh has given a great performance and undoubtedly, it is a treat for every fan of King Khan to watch him playing two roles!!

This Looked Like Mouth Of Hell But When Seen Closely, It Was An Unimaginable Sight!
No Father-In-Law Can Do What Amitabh Bachchan Did For “Bahu” Aishwarya