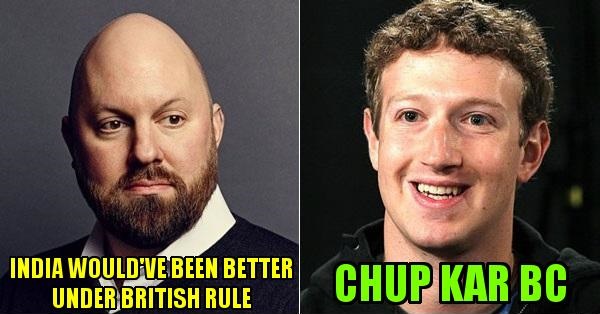 The Social networking firm Facebook and its officials were upset after the TRAI decision came out in favor of Net Neutrality and it prohibited all the telecom operators from charging differential pricing from the consumers. This made sure that Free Basics service can’t be implemented in India; however, Facebook left no stone unturned in garnering support for this concept.

This obviously saddened Mark Zuckerberg and his board members but Mark responded in a subtle manner; nevertheless, one of the board members named Marc Andreessen chose to make a harsh comment which hurt every Indian and he got a mouthful response from Indian netizens.

Marc said that India would have been better off if it had been under the rule of British and standing against Free Basics would further make the country economically weak.

Now Mark Zuckerberg has responded on the comment made by Marc and put his opinion forward. This is what he wrote on Facebook:

“I want to respond to Marc Andreessen’s comments about India yesterday. I found the comments deeply upsetting, and they do not represent the way Facebook or I think at all.

India has been personally important to me and Facebook. Early on in my thinking about our mission, I traveled to India and was inspired by the humanity, spirit and values of the people. It solidified my understanding that when all people have the power to share their experiences, the entire world will make progress.

Facebook stands for helping to connect people and giving them voice to shape their own future. But to shape the future we need to understand the past. As our community in India has grown, I’ve gained a deeper appreciation for the need to understand India’s history and culture. I’ve been inspired by how much progress India has made in building a strong nation and the largest democracy in the world, and I look forward to strengthening my connection to the country.”

Do let us know what you feel about it in the comments section below.