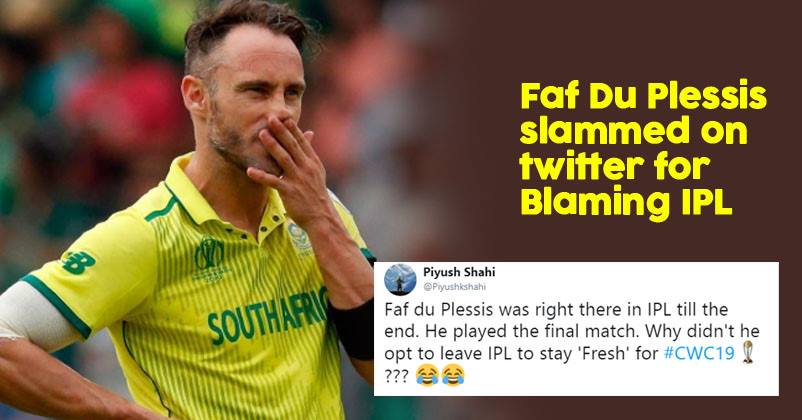 South Africa has become the second team to use the exit door of the ongoing ICC World Cup campaign. After losing its last match to Pakistan by 49 runs on Sunday at Lord’s Cricket Ground, the team captain Faf du Plessis started playing the blame game. SA skipper du Plessis blamed the Indian Premier League (IPL) for his team’s poor performance.

He said that his team was not fresh when they came to the World Cup, especially his ace player Kagiso Rabada. At a press conference, du Plessis said, “So I don’t think it’s not necessarily just the IPL, but it was important for a few guys to rest; and the fact that they didn’t mean that they — you know, they came into the tournament not fresh. That’s not an excuse; that’s just a fact. And KG (Kagiso Rabada) is — you can see that his pace is probably a little bit down from where he normally is.”

He further added that he tried to stop Rabada from playing the IPL.

However, people did not like the South African captain’s statement and pointed out that he also played in IPL with Chennai Super Kings. He was in the game till the very end as his team went to the finals.

Twitterians slammed and trolled du Plessis for blaming IPL for his own mistake as he himself was a part of the IPL. People even pointed out that other players also played the IPL but they are performing well.

Here are the best replies from Twitter users to Faf du Plessis’ statement:

This is a commonsense reminder to u

Most of all Indian team player, Even Willimson, Smith, Warner were busy with IPL, but they are doing good at worldcup too #WorldCup2019

Faf Du Plessis has been blaming ipl for each players performance. Conveniently forgetting that he played the entire ipl. This time it is purely a leadership failure. They did not even get to the point where they normally start choking.

Faf du Plessis had blamed IPL for Dale Steyn's injury, which was somewhat true. But now he blames IPL for Kagiso Rabada's mundane performance. This is lame from SA captain. Rabada was bowling only four overs per match in the IPL. #CWC19 #PAKvSA

Previously you blamed IPL on steyn's fitness and now again for Rabada poor performance. Then being as a captain you should have taken initiative on not playing IPL!

Then y faf played IPL?? He also can take rest and get fresh for worldcup😏. If he did that, who knows rabada can do the same then SA played well and reach the final, then go home with cup 🙇if you need that then u may take tough decisions faf..

When Faf himself played IPL, how can he ask any other player to not participate in it?

What is your performance faf!

Jofra was at Ipl, bumrah played till final,Tahir played till late stages. It's not about fatigue. It's about form and confidence. When there is enough support from the batsman, kasigo will have enuf motivation to do well.