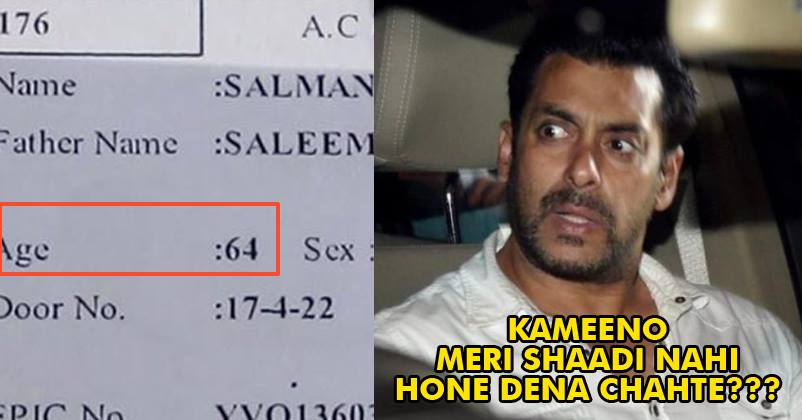 Everyone wants to live a life of a celebrity, only some people achieve it. While there are some who just make their own ways by some means. Last month, the Internet was flooded with birthday wishes for Salman Khan as he turned 51. A lot of celebrities wished him and his fans just went totally crazy as expected. However, according to a “reliable source” (no it’s not), his age is not 51 but surprisingly, it’s 64. Yes, you read that right. The reason why I called the source as a reliable one is due to the fact that his age has been declared on a freaking VOTED ID CARD. This is something that is considered as a benchmark of verification in India.

The VOTER ID Card first came to notice during The Greater Hyderabad Municipal Corporation (GHMC) elections when a man was trying to cast his vote through this voter id card. In the Voter ID card, one can see Salman Khan’s image which is ironically not a passport size styled photograph. What is more interesting is the fact that this time the Voter Id Card gets the father’s name right which is quite rare. Have a look at it. According to people, such news aren’t new things during the time of Hyderabadi elections as per reported by a news channel. Even during the previous election, such instances came into the picture. This voter id card was acquired from a person who did come to cast his vote for Hyderabadi Civic Polls. The polling booth staff members were shocked to see the voter id card and straight away took the person’s right to cast his vote. According to a report in Bollywood Life, a resident Syed Haider said, “Those who are genuine voters in a locality don’t get identity cards or their names are deleted without any notice. Though this has happened with many people, it is the first time an actor’s picture has appeared on another voter’s id card.”

Well, this is indeed something quite weird and funny to some extent, but it definitely exposes the fault that our system has. How could a person make such kind of an original voter ID card where he was supposed to go through various verification processes. What are your views on this issue? Please share your opinion in the comment section below.