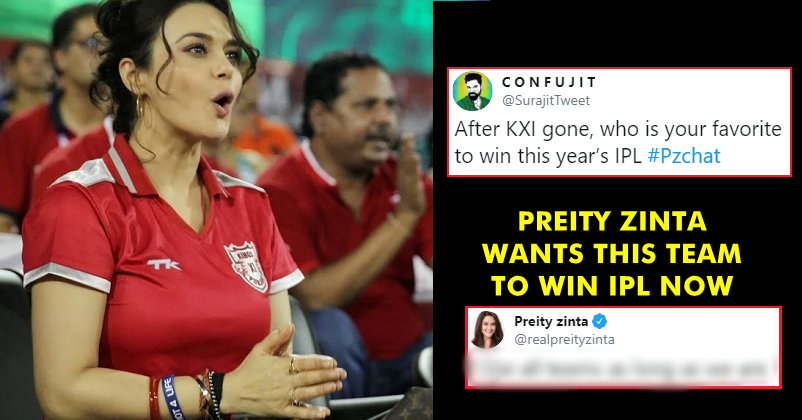 Yesterday, Kings XI Punjab were disqualified from IPL 2018 after CSK defeated them. KXIP had a slight chance if Mumbai Indians lost, but sadly even that didn’t happen.

Preity Zinta’s video had gone viral on the internet in which she said, “I am really happy that Mumbai knocked down”. However after KXIP’s elimination, Preity Zinta was highly disappointed. The team won maximum matches but this ouster brought a wave of sadness.

The actress was always there to support her team. However, after elimination, she took to Twitter to host a chat with fans. Many questions started pouring in.

Someone asked her, “Now that KXIP is out, which team do you want should win the IPL 2018”. Check what she replied;

This is the question…

And this is what Preity replied;

I like all teams as long as we are not playing against them 😀 but I am a big @msdhoni so I’m happy to see him shine. https://t.co/iTHLk5yikJ

“I like all teams as long as we are not playing against them 😀 but I am a big @msdhoni so I’m happy to see him shine.”

She loves all the teams, but indirectly she says that CSK must win, thanks to her love for Dhoni.

Some other questions also followed;

What do you think about Superman? 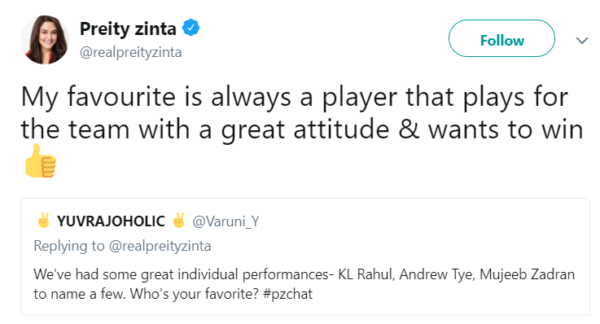 Your happiness could be seen!

So these were some frank answers from Preity. Do you want to ask her something?

Continue Reading
You may also like...
Related Topics:IPL, KXIP, Preity