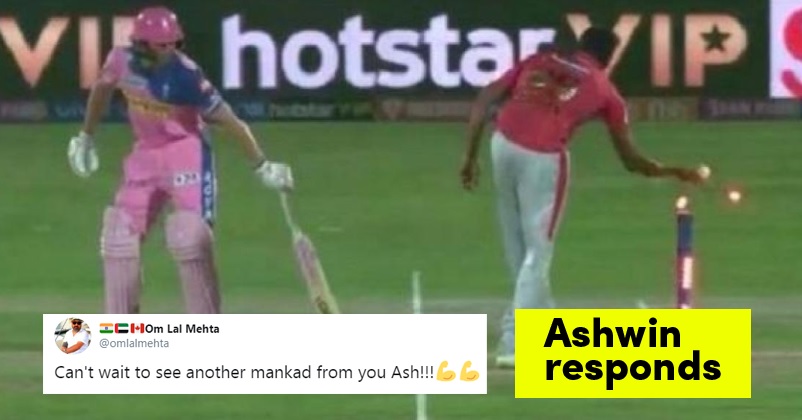 The Indian cricketer Ravichandran Ashwin has become one of the favourites of the trollers after the mankading saga which took place in the IPL match between Kings XI Punjab (KXIP) and Rajasthan Royals (RR) in IPL 2019. Since then, he has been trolled many times in regard to mankading but every time, he has dealt with the trollers in a strong manner.

Recently, a fan tagged Ashwin in a tweet in which the former Australian pacer Glenn McGrath’s reply to a question related to mankading was posted. Glenn was asked whether he would mankad a batsman in the World Cup final even if the opposition needs just 2 runs and the last wicket is on the crease. The Australian great replied in negative and the Indian spinner replied the hater in a classy style by saying that Glenn McGrath is a great bowler and he respects him a lot but his answer to the question may not be the only right answer.

Dear sir, Glen McGrath is one of the greatest bowlers to have played the game and I greatly respect his answer for the question but to tell me that it’s the only right answer is wrong on your part. 🙏 https://t.co/y9dKAZkOXP

R Ashwin was also in a good mood and he gave a hilarious reply to the fan, “Imagine the euphoria that will surround me after that😂😂”

Imagine the euphoria that will surround me after that😂😂

In IPL 2019, R Ashwin was the skipper of KXIP and in the match against RR when he was bowling, he saw that Jos Buttler who was at the non-striker end was out of the crease even before the ball was thrown. Ashwin quickly removed the bails and appealed for the wicket which was accepted by the umpire.

The RR batsman was left shocked and this incident divided the cricket fans as some believe that Ashwin did the correct thing while several others were of the opinion that Ashwin disrespected the spirit of the game. Ashwin has always stood his ground on this issue despite being slammed by some of his counterparts and former cricketers. He opines that whatever he did was as per the laws so there is nothing wrong in it and he will do it again if he gets the chance.

We are sure that even the non-strikers will be very careful whenever Ashwin will bowl.