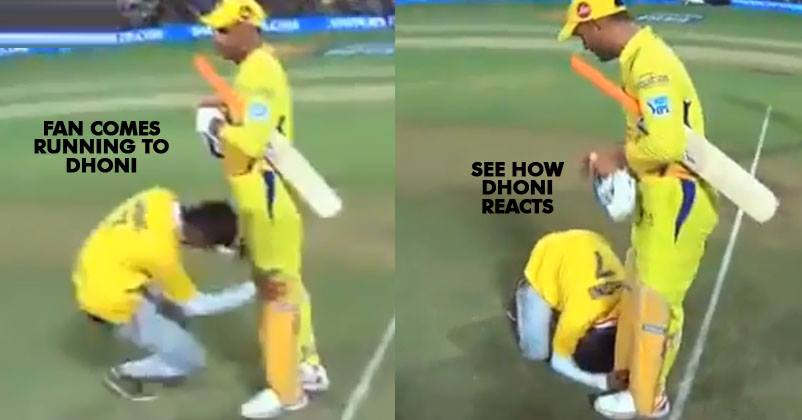 CSK’s performance in this IPL season has been simply amazing. Out of 10, the team has already won 7 matches, thereby making their fans super happy.

Today, CSK defeated RCB by 6 wickets. Yes, RCB could score a total of just 127 and CSK chased it easily. Dhoni came to bat in the 12th over and he stayed strong till the end.

Bravo finished the match in style and the whole stadium was delighted over CSK’s win. Many fans of Dhoni supported him throughout the match. In the last match against KKR, we had seen how a fan had breached security to go and touch Dhoni’s feet.

In today’s match too, we got to see something similar. A fan came running to the ground and fell on Dhoni’s feet. He too breached the security and went to the captain.

Once again, the incident proves that people consider Dhoni as “God”. Dhoni was busy removing his gloves when the fan touched his feet. Like a gentleman, Dhoni patted his back and didn’t react too much.

Official handle of IPL shared the video; have a look…

As @ChennaiIPL climb to the top of the #VIVOIPL points table, yet another fan rushes to meet his idol @msdhoni. #CSKvRCB #VIVOIPL pic.twitter.com/p14RVjGFs9

It’s indeed a happy moment for us that Dhoni is enjoying so much respect. We also appreciate him for humbly patting on the fan’s back and not showing any attitude.