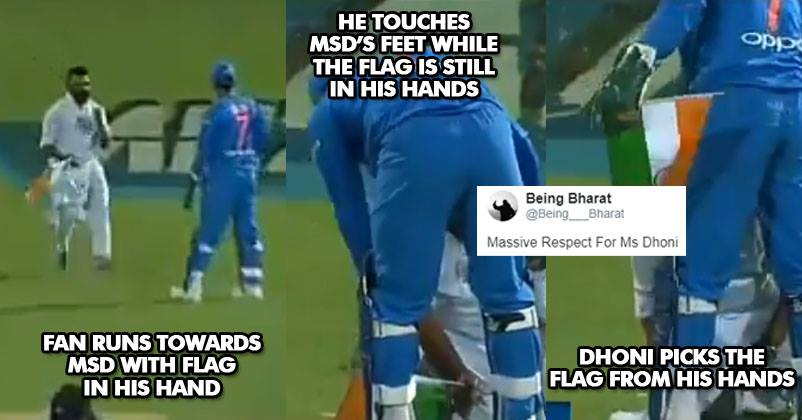 MS Dhoni, the former skipper of team India, is one of the most loved cricketers and his fans are absolutely crazy for him.

In the third and final T20 against New Zealand when the hosts were batting, a fan of MSD breached security, came running on the ground towards Dhoni and touched his feet. The fan was also carrying an Indian flag and while he bent down to touch Dhoni’s feet, the flag touched the ground. As the Indian cricketer saw the flag touching the ground, he picked it up instantly.

As the video of the same goes viral, fans are going gaga over this patriotic gesture of Dhoni and showering praises on him on the micro-blogging site Twitter.

The fans of MSD have breached the security 13 times earlier in India to take his blessings but what has surprised everyone is the fact that this time (14th time), it has happened in New Zealand.

People are expressing their love and respect for Dhoni for the gesture that he showed. Here are some selected reactions:

I know we lost but i have so much respect for Dhoni but this tops it all. The Indian fan forgot you shouldn’t put the national flag on the ground or near the shoes but MS even during a game realised that. Took it right off him, amazing. #NZvIND pic.twitter.com/gTrByBvoF9

Dhoni never keep Flag on his helmet as he had to put it down for sometimes sums up this ❣🙏🏻!!

The m guy that went on field didnt care about India's flag touching the ground but Dhoni did.

The guy who was trying to keep the flag at Dhoni's feet, complete idiot. Fine, you follow Dhoni but did he forget it was a national flag?? Dhoni smart enough to quickly snatch it💙.

Meanwhile, India lost the T20 series to New Zealand by 2-1 after the hosts won the final T20 match by 4 runs. Colin Munro was the Man of the Match while his opening partner Tim Seifert was declared Man of the Series as he scored 139 runs in the 3 matches at an average of 46.33 runs. Dhoni was not able to play a big innings in this match as he managed only 2 runs in 4 balls before getting out.

The New Zealand tour of the Indian team gets over with this match and now India will be playing against Australia in the home series.