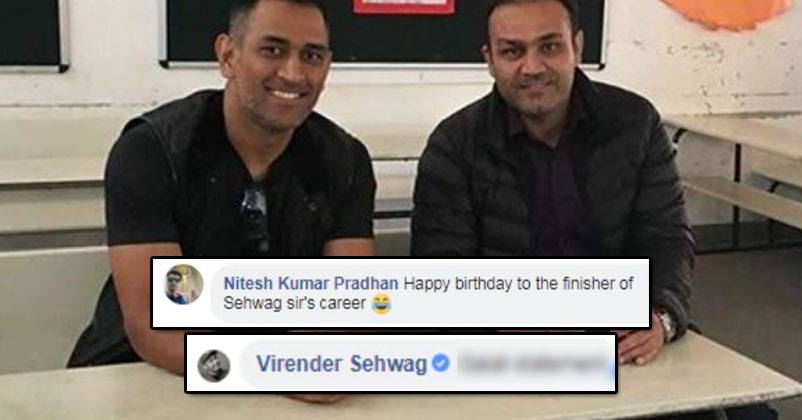 There are many rumors about Dhoni’s tiff with senior players. Everyone knows that when Dhoni became the captain of the Indian cricket team, he convinced the management to opt for young players instead of senior ones in limited-overs side.

It is said that due to this very reason, not many senior players are happy with him. In fact, this one decision spoiled his relation with many. If rumors are to be believed, Sehwag and Dhoni don’t share a cordial relation owing to this.

The first incident was during World T20 final when Sehwag was replaced by Yusuf Pathan. Also, in the 2015 World Cup, Sehwag was ignored. However, Sehwag had clarified that all the rumors about his sour relation with the captain are totally fake.

But as we know, trollers will never shut their mouths. Even now, Sehwag and Dhoni are trolled over this. Today, on the occasion of Dhoni’s 37th birthday, Sehwag shared a wonderful message for him on Facebook.

In the comments section, a fan tried to show his over-smartness. Rather than dropping a good wish, he left a sarcastic comment for Dhoni and called him the “Finisher of Sehwag’s career”

The comment read, “Happy birthday to the finisher of Sehwag sir’s career”

Rather than keeping quiet, Sehwag replied to him and told him the truth. He wrote;

Sehwag wrote just 2 words “Galat Statement” and didn’t bother to give him any explanation. However, he made him realize that he was wrong.

Kudos to Sehwag sir; we loved the way he didn’t entertain the trolls.

Continue Reading
You may also like...
Related Topics:Dhoni, sehwag