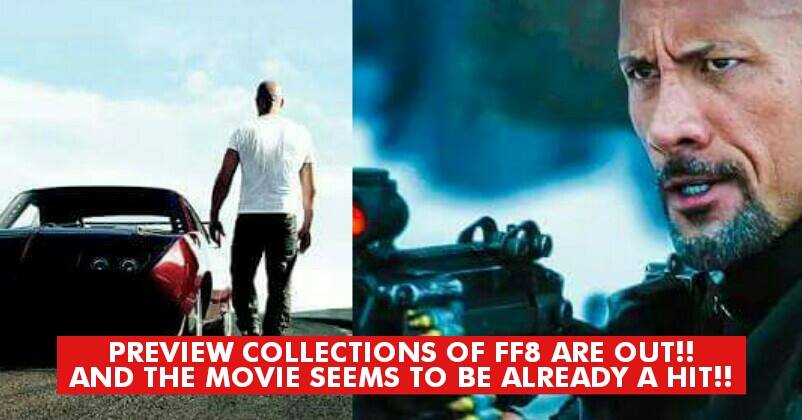 Hollywood movies generally don’t get the much-deserved box office success in India like they get in other countries.

The reason is that our country loves Bollywood and are passionate about Hindi cinema in a true sense. However, since the audience is developing taste into content-driven cinema, Hollywood movies are slowly picking up the pace. The latest release of Fast and Furious 8 proves that Hollywood movies are performing really well in India. The Vin Diesel, Jason Statham and Dwayne Johnson starrer Fast & Furious 8 had amazing results for the paid preview shows that started today 3.30 pm.

The Preview show results are out and it is comparatively better than other Bollywood movies’ opening collection. The movie collected 8.50 Crores gross in its paid preview shows.

If we go back in history, the last franchise Fast and Furious 7 was the highest Hollywood opening grosser in India with 12 Crore on Day 1.

Despite the shows starting late after 3.30pm, the movie has managed to become the 5th Highest opening in 2017. It stands behind Raees, Jolly LLb 2, Badrinath Ki Dulhania and Kaabil.

The movie is expected to grow business in the coming weekend. With power packed performances and good word of mouth, the movie is surely going to pick up at the box office.

Sunny Deol Did What Other Stars Won’t Even Dare To Do, He Will Clash His Movie With Salman Khan
Akshay Kumar Speaks Up On Clashing With Shah Rukh Khan! His Answer Will Surprise You