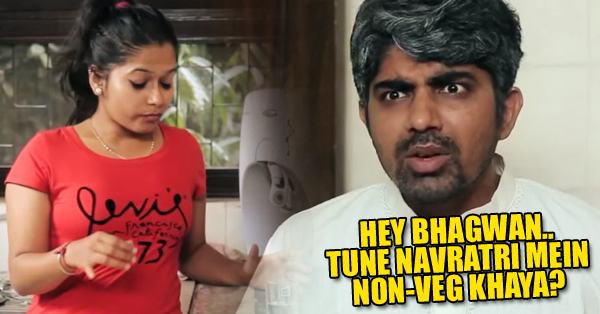 Navratra is a religious festival celebrated by Hindus in which they worship Goddesses for a period of 9 days. This festival is regarded as very sacred and people are prohibited to eat non-veg and drink alcohol during Navratra.

Here we present a comic video under Saini Sahab Series Of Comedy by Purani Dilli Talkies in which Saini Sahab finds his daughter Ruchika cooking and eating non-veg in Navratra while her father is a pure vegetarian. His anger naturally was on the seventh sky after seeing this and as a result, he started scolding her but what eventually happened is a lesson for all who eat anything before confirming what the food stuff actually is!

DISCLAIMER: RVCJ IS NOT INTENDED TO HURT EMOTIONAL AND RELIGIOUS SENTIMENTS OF ANYONE BY MEANS OF THE CONTENT OF THIS VIDEO & IT’S FOR ENTERTAINMENT PURPOSE ONLY

Continue Reading
You may also like...
Related Topics:Father Caught Daughter Eating Non-Veg During Navratra. What He Did Will Shock You

This Looked Like Mouth Of Hell But When Seen Closely, It Was An Unimaginable Sight!
India To America In Just 42 Minutes – Here’s How It Is Possible!!