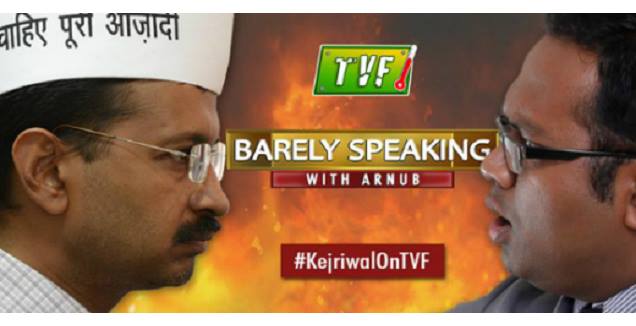 It’s a must watch video for every single person regardless of whether you are interested in politics or not. Moreover, those who find politics boring will be compelled to change their views today, as it will make them burst into laughter from beginning to end

In the video, Arnub conducts an interview with Arvind Kejriwal and compares his fashion statement, moustache and career with that of Anil Kapoor’s Nayak stating the only difference is that the movie lasted for more number of days on Set Max than Kejriwal’s government after winning the Delhi election last year. Besides, Arnub makes a fun of Kejriwal by saying that he has a bad dressing sense in addition to asking him for a cough syrup. Afterwards, he asks Arvind whether he has ever been involved in corruption and on getting a negative reply; he again makes a humorous statement as to whether Kejriwal has tried corruption ever in his life. And if he has not, how he can be so sure that corruption is bad and it should be finished to the core. According to Arnub, corruption has its own advantages and must be tried once… lol…

Arnub also jokes about Kejriwal’s statement on CCTV and women empowerment, recalling him of the defeat he got in Varanasi in addition to calling him a seasoned politician. Furthermore, he questions Arvind on being the representative of Aam Aadmi and links it to his party’s symbol Jhaadu, saying that Aam Aadmi spreads dirt most on the streets. Later, he calls Arjun Kejriwal, the founder and filmmaker of Bollywood Aam Aadmi Party, to join the interview as the second guest.