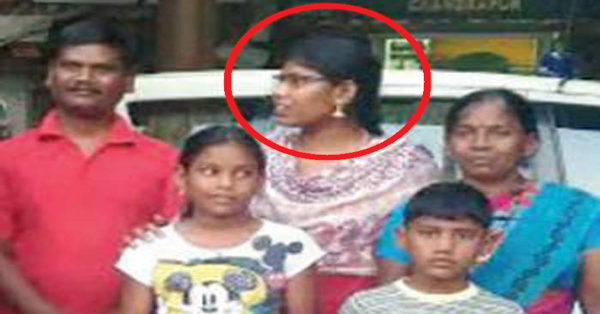 Jyotsna Dhawle’s story seems to come out straight from the pen of a movie script writer but it is absolutely real one! She got separated from her family at the age of 8 and it took her 21 years to meet them again.

Jyotsna used to live in Datta Nagar area of Chandrapur, Maharashtra which is around 1000 km from Bengaluru, one day while playing, she felt asleep in a train and woke up after 20 hours in Mumbai.

She took another train in an attempt to return to her home but got down in Secunderabad as, “I realised I was nowhere near home. I begged for help to reach Chandrapur, but nobody had heard of the place.” She got a job in a small canteen where she requested for food. In her words, “The owner took pity on me and I worked as a domestic help till I was beaten and thrown out a year later.” She didn’t stop making attempts for returning to her home but after one of her attempts, she was admitted in a hospital by a lady constable and from there, she was sent to home for abandoned children.

Even after getting married and having two kids, she didn’t lose hope and as they say, “where there is a will, there is a way”. One day she got in touch with a lady constable Mamata Mandvi after she called on Chandrapur police helpline.

Mamata told, “On March 16 I received a call from Jyotsna,” after which SP Sandip Diwan, with his team found her father with the help of a missing complaint report. After 21 years, Jyotsna came back to her town to meet her family with her husband and kids.

This Is High Time To Prove You Are Actually A Human Being! Don’t Miss This Chance
10 Weirdly Awesome Things That Happen When You Marry Outside Your Caste, Religion Or State