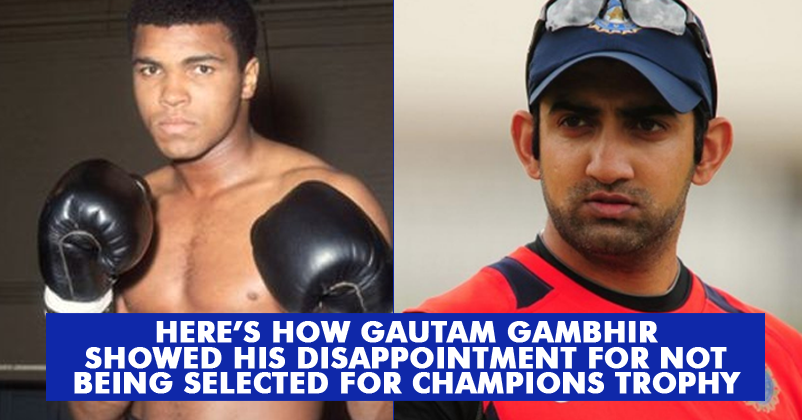 Gautam Gambhir was not selected as a part of Indian Cricket Team for upcoming Champions Trophy and the fans were not happy about it. It was the feud between Captain Virat Kohli and Gambhir that was blamed for latter not being able to make it to the list. Gambhir, however, stated that his IPL T20 performance can’t be considered for Champions Trophy as both are different formats.

But it was his update on Twitter that took our heart away. Reacting to the decision by BCCI, Gautam Gambhir retweeted an inspirational quote by Boxing Legend Mohammad Ali. Here’s the screenshot; “I am grateful for all my victories, but I am especially grateful for my losses because they only made me work harder.” #MondayMotivation

“I am grateful for all my victories, but I am especially grateful for my losses because they only made me work harder.” #MondayMotivation pic.twitter.com/bAHdX9DmtN

This update led to some awesome reactions from Twitterati. Have a look –

Hope U are doing well Idol..
U are a true inspiration..n motivation for everyone..keep inspiring Us..n we all are always dere for U..💟💟🏆🏆

U ll be missed by us n by indian team as well…..

@GautamGambhir the harder the struggle, the more glorious the triumph will be. Don't give up Gauti Bhai. We support & stand by you.

This really proves the class of Gambhir and what a great guy he is. Don’t you agree? Share your thoughts in comment section.