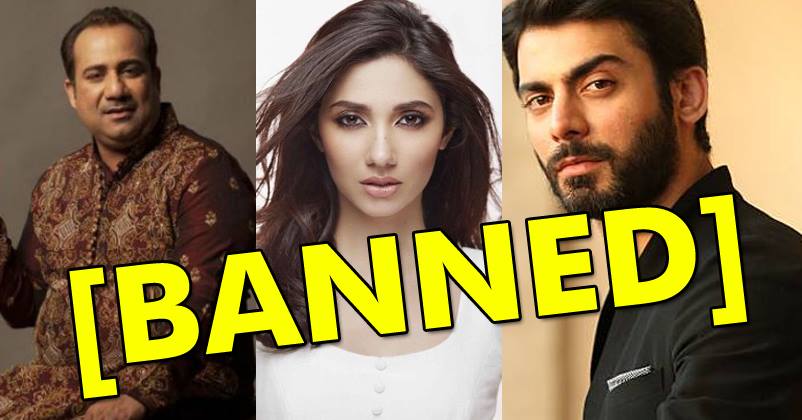 Emotions are shedding in, angers are bursting out and finally, verdict has come out. Just after the URI Attacks, Pakistan went through a series of criticism for supporting Terror groups and organizations which are responsible for carrying out many attacks in India.

Prime Minister Narendra Modi called for a complete International Isolation of Pakistan. In response to his request, many Indians started protesting against the working of Pakistani Artists in our Bollywood Industry. MNS came out with warnings asking the Pakistani Artists to return to their country within 48 hours. Debates and Discussions took place where words like ‘respect’ and ‘etiquette’ got no meanings. Although the discussion was taking place on the basis of personal opinions and not on a verdict of a higher authority, it was quite difficult to get a clear picture.

However The Indian Motion Picture Producers Association just announced that Pakistani actors and technicians will be banned from working in India “till normalcy returns” between the nations. This ban has just come after MNS issued warning to all Pakistani Artists working in India. However, the ban will not applied to movies that are under process of being made or movies that have already been made like Ae Dil Hai Mushkil or Raees. The ban is for all the future projects.

President of MNS’ film wing Amey Khopkar said: “The day Pakistan will stop attacking our country, we will extend the hand of friendship. We do not have anything against art but the artistes who are employed in India remained mum on the terror attack in Uri.”

In the midst of all these discussions through the past week, a lot of celebrities have poured in their opinion about this issue. Lets have a look at them. “Our film industry is open to talents from around the world especially cross the border. We are artists who talk about love and peace. The government must make decisions about law and order and who is allowed and who isn’t.” “Why should some Pakistani artist pay for what is happening at the border which is being done by someone else, just because they happen to be from Pakistan ? Art, artists and films should not be bound by things like these” “The Ban has come from the government. And if they take steps, we will have to see what they do after that. If by banning actors, terrorism can be stopped, then they should do it” “If this was truly a solution, one would take it. But this is not a solution. I don’t believe it is. The larger forces have to come together and sort the situation and this cannot be done by banning talent or art. “We have gone out of our senses. The issues raised are showing we are just trying to fix problems; we are not taking that out from the roots . . We have to change from within” “Banning or sending artists back to Pakistan won’t serve any purpose, unless they are provoking any unpleasant emotions. Nobody belonging to the field of art is spreading hatred.” “This country has 1.2 billion people, we have top notch artists here. I don’t understand the need to hire people from across the border . If (Pakistani Artists) leave India, will Bollywood shut down ? Will the film industry shut down ? “This asking ( Pakistan Actors to leave is like trivializing the issue, whether artists of cricket should be allowed or not . . . How does that matter? What matters is that people are dying. We have been constantly suffering .. And the only thing we do is ban artists.” “I never said boycott . . I said kick these Paki B*^ta#ds. Karan Johar and Mahesh Bhatt should feel ashamed for supporting them.”

So what do you think guys? Will the ban be lifted or would this fight continue? Do let us know in our comments section below.

Indians Slammed Pakistani Govt For Banning Dhoni’s Biopic! Check Furious Tweets…
Mistakes In These 10 Popular Bollywood Movies That You Probably Did Not Notice!