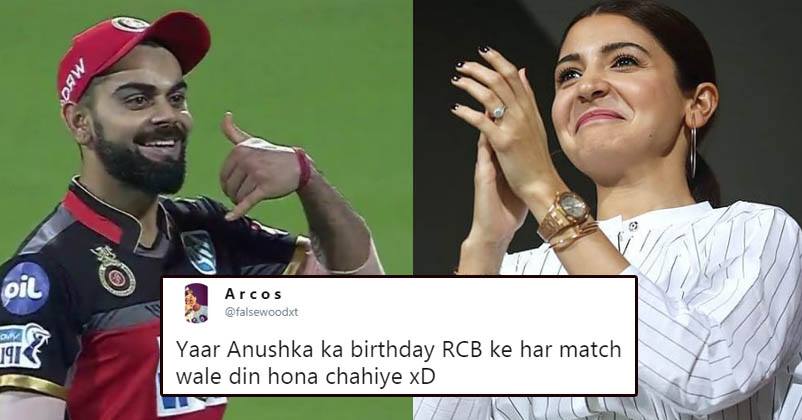 Today’s match is between RCB and Mumbai Indians and as every game, this one was interesting too. Mumbai Indians won the toss and elected to bowl first.

RCB batting was not that good because they managed to score just 167 runs. Virat got out at 32 off 26 deliveries and after him, other wickets too started falling. Talking about Mumbai Indians batting, it was not good either; Rohit Sharma got out at 0 which was completely unexpected.

After a tough fight, Mumbai Indians lost the match by 14 runs. RCB’s win was totally unexpected today as their performance has been very weak throughout the tournament. Often, the team is trolled for a poor show. Today it’s Anushka Sharma’s birthday and nothing can beat this birthday gift.

Even Twitter is happy that Virat Kohli could finally make Anushka Sharma happy with this win. Check out some happy tweets by RCB fans.

Good bowling, good fielding, and RCB is a brilliant side all of a sudden. They needed this earlier in the tournament. Hope it's not too late. #RCBvsMI #IPL2018 #CricbuzzLIVE @cricbuzz #cricbuzz

What a special day for Kohli

Love so special like this. Anushka Sharma's birthday and Virat Kohli won this match for her. Epic. Look at that emotion on her face. Such support. #RCB #RCBvMI #MIvsRCB pic.twitter.com/ksZIustbb2

If that's what it takes for RCB to win, can we please just pretend like everyday is Anushka Sharma's birthday…?#RCB #IPL2018 #RCBvMI #MumbaiIndians #AnushkaSharma #VIVOIPL

when RCB loses game, people blame Anushka for her presence.

But today RCB wins the game. All credit goes to Anushka Sharma for her presence. She is lucky #RCBvMI

Finally a smile on all RCB fans tonight.

Begun the day by gifting to Anushka!

Ended the day by receiving gift from RCB bowlers!

I'm not A RCB Fan #RCBvMI But I wanted #RCB to win the match I don't want to see anushka to see sad on her birthday Glad they won.