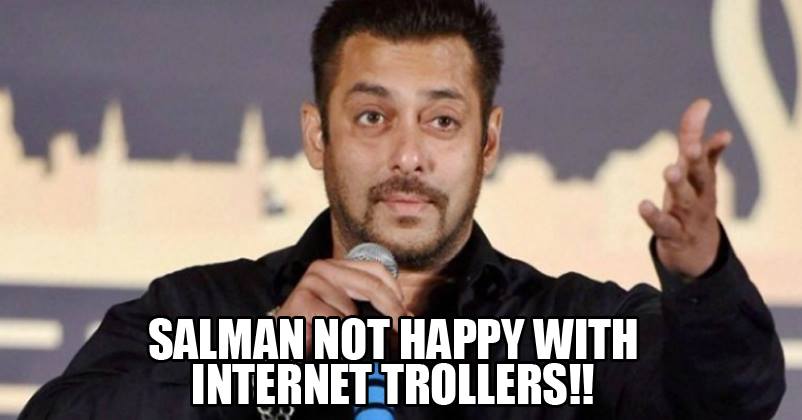 For fans, social media is a blessing since they get a chance of reaching their favorite stars. But do you think stars must be equally enjoying? Well, it is a big ‘NO’ since they are quite frustrated with those irritating trolls.

Some days back, Salman Khan was super angry when he came to know that some of his fans had made fake accounts on Salman’s name and also posted some bad and abusive comments on official social media accounts of Aamir Khan and Shah Rukh Khan. Moreover, this was not it; those fake accounts also went ahead for making a fake casting call for a movie, isn’t it irritating? On seeing this the ‘Sultan’ star warned these fans that if they don’t behave well, he would ultimately quit Twitter.

“People misuse freedom of expression on internet 100 percent. Freedom of expression is that you should be responsible for what you say. It’s not saying something behind someone’s back and thinking that no one will find out as it is on the web or do whatever you feel like or hire some company or some boys. It is not only unfair, but gandh (dirt) as well.”

Being so frustrated with the increasing number of trolls, Salman also urged people that instead of hiding behind those fake accounts, they must come out and speak face to face. He further added that “All this will sort out with two-four cases being reported and they (those people) going inside the jail. Others will get an example of it and will be warned of consequences.”

Referring to how easily fake accounts are tracked by Cyber Cell, Salman says that “They know exactly who is writing what.” So guys, what do you have to say about this, don’t you agree with Salman Khan? Do let us know your comments in our comments section below!