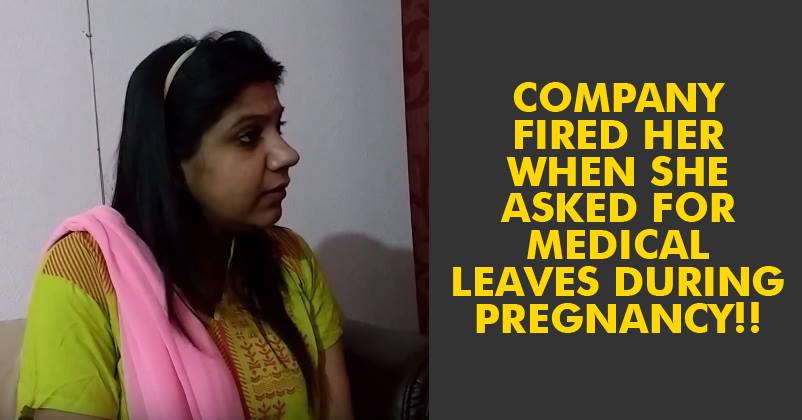 I really don’t expect the international changing trends towards working women, such as UK’s ‘Period Leave” to get implemented by the Indian Organizations immediately, but one thing we all understand and expect as human beings is as basic as “Maternity Leave” for working women.

Why always the women has to through this mental turmoil against the management of the organizations to get their “Maternity Leave”, which is extremely essential and granted as per the Maternity Act 1961.

Similar incidence happened with Radhika Gupta, a 28 year old employee of Radius Synergies International Pvt. Ltd Noida since 2 years. Things were going pretty well until she sought for ‘Maternity leave’ from her employer.

If you aren’t aware, all women employees do get 12 weeks maternity leave under Maternity Act 1961. Now as per the Act’s section 21, if the employer doesn’t grant the leave for the mentioned period, he would be punished and imprisoned.

Yes, owing to some medical complications in her health, she wanted some extra leaves. Now, do you know what her boss did? Well, he didn’t only deny the leave but also terminated her from the company, isn’t that cruel?

This is what Radhika had mailed the HR! You would be shocked to read what reply she got from the HR! Have a look! Being very upset by this, Radhika decided she won’t stay silent to this and will raise her voice.
When team of RVCJ extended support to her and talked to her, she mentioned

“To my shock, before terminating my employment, I got a call from office and they threatened me to resign again or else they will terminate my employment and said that termination will not be good for my career. The moment I received this call, I decided to fight for my rights as i am lawfully eligible for 12 weeks maternity leaves as per “Maternity Benefit Act, 1961″”

Do you know the reason why this ‘Maternity leave’ was denied? This was because the company couldn’t afford a leave for so long. However, when she refused, an official termination letter was sent to her!

Radhika even took action on this!

Now, in spite of termination letter, Radhika decided to take a strict action. She sent a letter to PMO and Ministry of Women and Child Development explaining the injustice that was done. Currently the Women Child Development Ministry is investigating the matter. Have a look at the complaint copy! We are gonna support her through this. It’s high time we stay silent to these issues!!

Too Much Moral Policing? Complaint Filed Against Vijender Singh For Disrespecting National Flag
Woman Delivers Baby Boy Just 10 days After Marriage. No She Didn’t Have Any Lover Or Boyfriend Before Marriage!