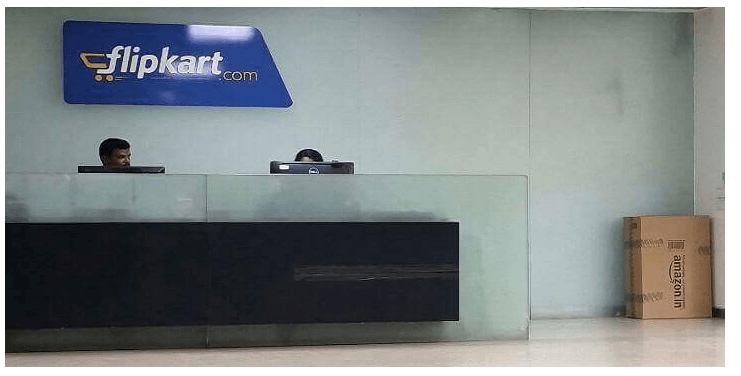 Online shopping is on the rise in India. Nowadays before going to any shop or before buying any product, we at least check Flipkart or Amazon once to see the reviews of real-life buyers. Nowadays we don’t get fooled easily by the shopkeeper because of these websites. And the rivalry between these two here in India has taken a new turn. Wanna know why? Continue with this article

The rivalry between these two shopping giants took the new turn after Reddit India shared below pic on Twitter:-

This photo shows a Flipkart office and you can clearly see that there’s a package from Amazon in the right corner of the photo. After this Flipkart compared Amazon with a dustbin & replied:-

@redditindia We recycled said packaging as our reception's dustbin.

Now after Flipkart compared Amazon with dustbin, hundreds of twitter users started making fun of Flipkart. We will update this article as & when we get response from Amazon India. Meanwhile have a look at what other users have to say about this twitter war between two biggest shopping giants:-

Check out RedditIndia tweet (they are provoking Amazon against Flipkart ):-

Hey @amazonIN, how about a response to @Flipkart pic.twitter.com/BK8f49n462

@Flipkart @redditindia Flipkart and Amazon, go get a knife you both, let's see who wins.

Do you have anything to say about Flipkart’s reply to Reddit India? Do you think it’s correct to call Amazon packaging as Dustbin? Share your views in comments section below

Is ICC Cricket World Cup 2015 Fixed?
See The Mid-Day Meals From Schools Around The Globe