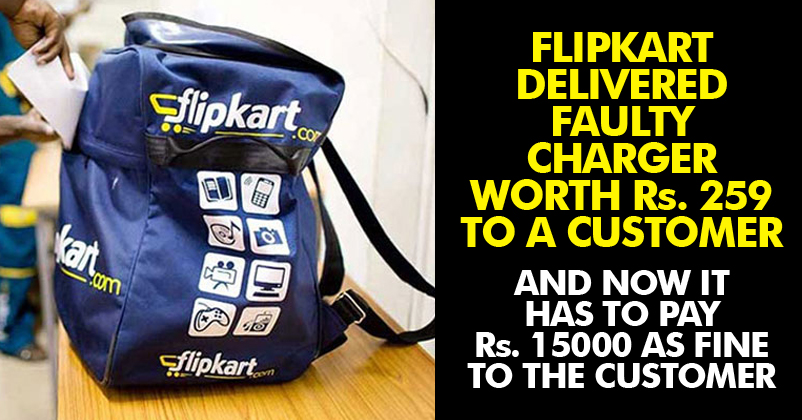 A consumer forum on district level has addressed to an online commercial company to compensate with a payment of 15000 to a customer on the grounds of selling him a faulty mobile charger resulting in damaging his phone.

The one to file the petition, Dr. Ahmed AQ Irfani, had purchased the charger via Flipkart around January 2016 for an amount of Rs 259. When he plugged in the charger into the power socket, connecting the cable to his mobile phone, in just less than around 10 minutes of a time span, the phone’s wires got burnt and in the process got completely damaged it.

“When I complained to Flipkart, they offered to replace the faulty charger but declined to compensate for the damage caused to my phone. They suggested that the device could have been damaged because of the surge in power,” said Irfani. This happened before the forum, Irfani added to the fact that while purchasing he was informed that the charger had a total capacity of withstanding any power fluctuations, in the range of 100-240 volts.

Accusing Flipkart of inefficient services, Irfani filed a petition seeking a reimbursement for the damage caused by the same.

Flipkart, in its defense, claimed that they are merely a commercial company that brings forth various buyers and sellers onto one platform to engage in the facilities of the same, they have no connection whatsoever with the quality of the products.

They further defended their case by directing the blame on a short-circuit as the real cause of damage, which had triggered due to an excessive current flow in the power source, hence, it’s not a damage triggered by a faulty charger, in the first place. “Flipkart cannot shirk their liability on the grounds that they did not charge any consideration from the complainant. The complainant purchased the product through Flipkart and therefore there exists a relationship between a consumer and the service provider between the two,” said the bench.

“When the battery charger had a wide range of 110 volts to 240 volts, it is not probable that the power surge would have damaged the mobile phone. In such facts and circumstances of the case, the complainant is entitled not only to the refund of the amount paid for the charger but to a reasonable compensation.”

We are glad Irfani’s concerns are addressed and resolved. The e-commerce sites have to be more responsible. What do you guys feel? Do let us know in the comments section.

You Think iPhone 7 Is An Expensive Phone? Then What Will You Call This Phone?
10 Best Smartphones You Can Buy If You Have A Budget Less Than Rs 15000