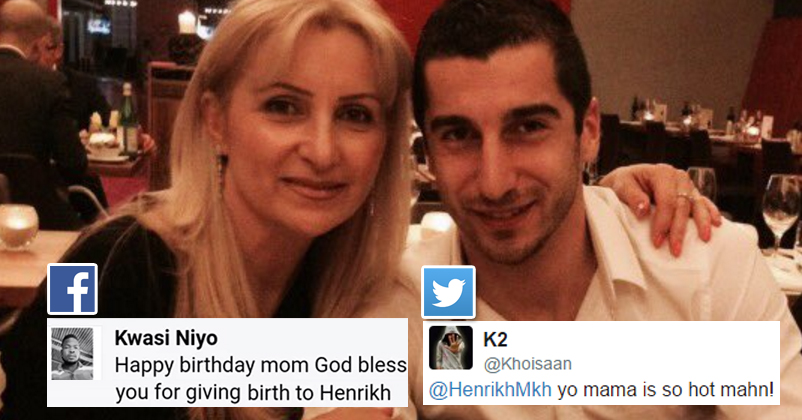 When it comes to social networking, Facebook, Twitter and Instagram are the first three names that pop up in almost every mind. While Instagram serves as a platform for the photogenics, Facebook and Twitter keep the talkatives busy. However, the Facebook community is always a notch better than the Twitterati when it comes to respecting the celebs and superstars.

Here is the beautiful picture Henrikh Mkhitaryan posted with his mother, Marina Taschyan, out on a meal at some florid restaurant.

A mother's love is like nothing else in the world. Happy Birthday Mom! pic.twitter.com/1QUUCt8USl

Facebook users loved this adorable post of Mkhitaryan with his mother, Marina Taschyan. While the Facebook community was all full of praises for the lovely mother-son picture, the Twitterati were just not ready to accept that the lady in the picture is the mother of a 28-year-old footballer.

Facebook was full of decent fans who were in awe of Mkhi’s love for his mother and all what they wished for was a hat-trick of goals to make his mother’s birthday all the more special. While Facebook users were busy thanking and admiring Ms Taschyan, who too is related to football and works for the Armenian FA, the Twitterati were ready with their flirt-attack on the beautiful mother of Henrikh Mkhitaryan. While a few where busy figuring out whether the lady was really Mkhi’s mother or his wife, a few others were all set to try their luck on her.

Here are a few tweets that aptly prove that Twitterati are nowhere near being decent at all!

Are you telling me that she isn't your girlfriend!? 😵

yo mama is so hot mahn!

One thing that one can surely make out of this is the fact that Twitterati don’t spare anyone and are ready with their lethal trolls every other time. We wish Twitter comes up with a set of etiquette that could stop this troll juggernaut of Twitterati. Do let us know which Social Media platform is the best according to you? Facebook, Twitter or Instagram?