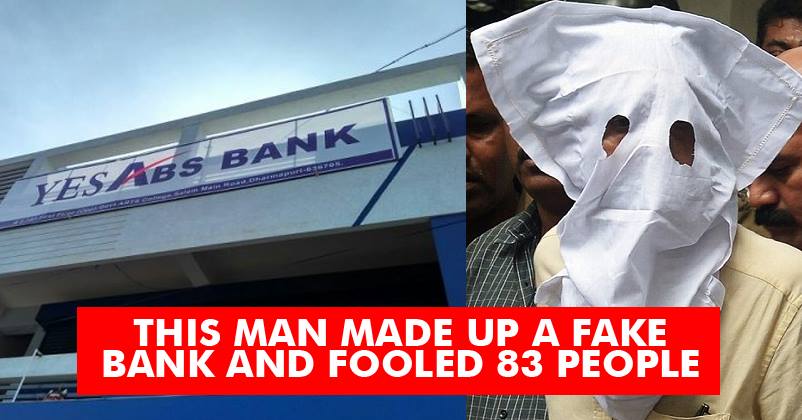 If you think that apart from the fakeness shown in someone’s Instagram ‘RANDOM_PICHAA’ is just enough to make you laugh, then you are certainly mistaken. Fake gadgets certainly become the talk of the town whenever new flagship phones are launched. There are indeed many FAKE COLLEGES that you might have heard off which is best depicted in the Bollywood movie ‘FALTU’ & Hollywood Movie ‘ACCEPTED’.

But have you ever heard about FAKE BANK ? Bank is something where we lay our trust. Bank is actually a hub of various trustworthy people but if a bank can turn out to be FAKE, then anything in this world can be FAKE. The incident is from Dharmapuri district, TAMIL NADU, where a group of men ( 4 people) were arrested by Police for opening a fake bank branch and replicating it as a partner associated of YES BANK by naming it as ‘YES ABS BANK’ Well,the most hilarious part of the whole scenario is that these 4 people had been running this Bank since the last 5 months and have almost collected or more precisely looted 1,23,000 Rupees from a total of 83 customers. They even collected Rs 1,000 from multiple candidates for a recruitment drive.

On doing a brief background history checks on the 4 accused, it was revealed that the main accuse aka THE CEO ‘Somasundaram (Age 31)’ was indeed recruited by YES BANK itself for the job of Business Correspondent to carry out some minimal bank operations like money transfer in Dharmapuri District. But he eventually ended up conspiring with his friends to open a FAKE BANK BRANCH and earn quick money. However when the real official Bank i:e YES BANK in SALEM came to know about such happenings through one of it customers, the Branch Manager, Sasikumar decided to enquire about it and at last reported an FIR in Dharmapuri Police Station. Many people who had been helping out this Fake Bank have also been arrested which mainly include people who were printing ‘CHALANS & OTHER SLIPS’ for this fake bank.

In a press conference, Saravanan, Deputy Superintendent of Police, Dharmapuri told the Media that these 4 people also had plans for opening many fake branches in districts like Tiruchengode and Rasipuram of Namakkal District and Aatayampatti in Salem. The other three involved in the case are Sundershan, (32), Murgesan, (48) and Balaji, (24). All four have been remanded to Dharmapuri prison.

According to the report, few weeks ago a group of women from a self help organization came into this bank seeking a loan to which the apparent FAKE CEO asked them to get 40 of their group members to open a Bank Account in order to get a LOAN. And for the opening of each bank account, the minimum fee charged was Rs 1000.

If you have some more relevant information regarding this news or if you want to share your opinion on this subject, then please write down your views in the comment section below.