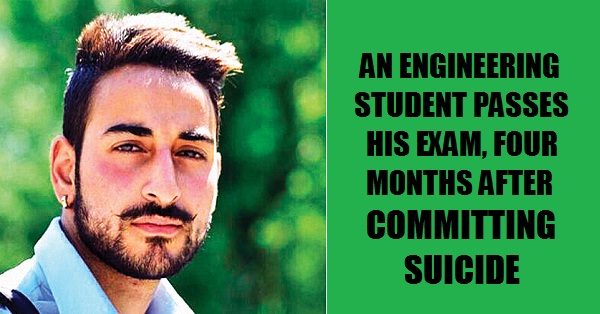 Adnan Hilal Gilkar, a 17 year old engineering student, who was pursuing diploma in electrical engineering at a Government Polytechnic College in Srinagar, Jammu and Kashmir committed suicide on June 18th this year when he was declared failed in his “Physics” exam, a subject his family and friends claimed he had mastery over.

But surprisingly, after 4 months from his death. The re-evaluation results of the board declares that the student doesn’t even cleared the exam but also topped the class while securing 48 marks from 100 but not 28 which was declared earlier and because of which he committed suicide.

The re-evaluation results have left the family of Adnan Hilal numbed as they feel that it is not a case of suicide but “murder”.

Earlier this year, after the results were declared, Adnan committed suicide after checking his results on Internet. He jumped into the Jhelum river, where his body was found after four days of the incident.

Adnan’s father Mr. Gilkar said, “This carelessness of university has led to my son’s death, and this is not a suicide. In fact I would consider this as a murder because of University’s carelessness. People responsible for this should be identified and a criminal case should be registered against them.”

On the other hand, The Jammu and Kashmir State Board of Technical Education (JKSBOTE) admitted it as their mistake, but said “Such things happen in other universities as well, while we regret for our mistake.”

Whats your take on the matter. Please let us know in the comments section below.