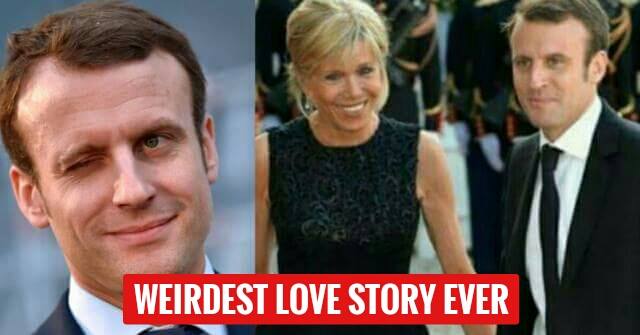 You wouldn’t believe this love story but this will kind of make you believe that true love is beyond any factors like age or sex, nothing matters if the love is true.

This weird love story is a little awkward too. To start with, the next French President is 39 Years old man who is married to a 64-Year-old woman. Well, this is nothing new we all know. We have seen marriages with vast age difference earlier also but such cases are rare.

However, the love story is surely going to make you a little startled. His 64-year-old wife was actually his class teacher when he was 15 years old. He was her student back then and she was happily married with 3 kids. He will become the next President of France and his name is Emmanuel Macron (39). He fell in love with his married class teacher with 3 kids and co-incidentally her daughter was also studying with him in the same class. Everyone thought that he was dating the daughter but no one predicted that it was actually the teacher who stole his heart.

When he turned 17, he promised that he would get married to the love of his life, his class teacher and that time she was 42 years old.

This coming next month, he will be swearing and taking over the position as President of France. It will be just 6 months to his 40th Birthday.

His wife has 3 Adult kids and 7 grandchildren. Her first child is 2 years older than her husband and the second child is his same age. Isn’t this one of a kind love story? Will you ever marry someone looking beyond their previous marriage, age or kids? True love is indeed a magical thing.

This Man Saw His Girlfriend Sleeping With Another Man, What He Did Next Will Surprise You
Sushma Swaraj Said Men Should Learn Household Work! You Need To Read Her Husband’s Reaction