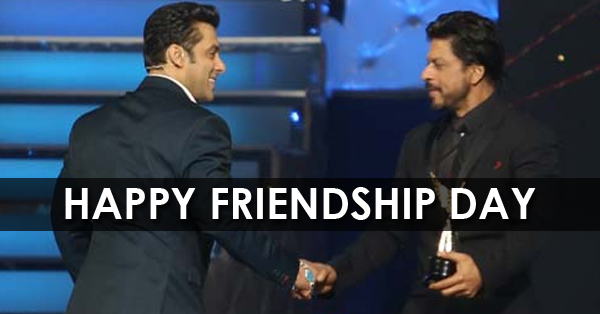 Its friendship day Today. A day celebrated by true friends. A Day dedicated to the true friendship that grows over the years between two or more people. Talking about the history of Friendship day, it was first proposed in the year 1958 by Joyce Hall, the founder of hallmark. Friendship among the Bollywood stars are also quite strong & evident over the years. They like any other friend help out each other and be with each other in Good as well as bad times. Be it Salman Khan and Sanjay Dutt or Ajay Devgn & Rohit Shetty.
On this friendship day lets us find out some of the strong bonds between friends in Bollywood: Their friendship tales of Baba & Bhai are quite old. They have shared many good and bad times together. Always extended their support for each other. They have done numerous movies together which includes Saajan, Dus, Yeh Hai Jalwam Chal Mere Bhai & Son Of Sardar. They have also been hosts of popular TV reality show BIGBOSS. Whenever there is any discussion about long lasting friendships in Bollywood, it would be a Sin to not to discuss Karan-SRK’s friendship. The bond is so strong that in most of the movies directed under the banner Dharma Productions & directed by Karan Johar, the lead was Undoubtedly SRK. They have worked together in Kuch Kuch Hota Hai, Kabhi Khushi Kabhi Gham, My Name Is Khan, Kal ho Na Ho, Kabhi Alvida Na Kehna. Like how Bhaijaan is a good friend with Sanjay Dutt, similarly he has shared good moments with Ajay Devgn too. Ajay & Salman have been friends since a long time. They both have worked together in the Super hit blockbuster movie HUM DIL DE CHUKE SANAM & have shared the screen in London Dreams too. Salman for his friends Ajay & Sanjay had played a small guest appearance in Son of Sardar too. Almost all the big stars in Bollywood are close to Bhai. Aamir Khan is also one of those, who shares close bond with Salman Khan. Their epic movie Andaz Apna Apna is still the considered as one of the best comedy movies in Bollywood. They both came close to  each other during Aamir’s divorce. They have share best moments on screen & off screen both. The friendship tale of these two beautiful ladies is a bit different. Once at an event Sonam Kapoor Helped Jacqueline with her Wardrobe Malfunction. From that moment media had evidenced a strong bond between the two. They both are often seen partying together & attending quite a few events together. Yes King Khan’s two wild cats are indeed very good friends. They have a strong affection for each other and have been seen in many events sharing light moments. Friends from childhood who have spent all the good and bad moments together. Kareena Kapoor was even the bridesmaid for Amrita’s Wedding. The Hot & Smoking GUNDAY’S of Bollywood recently developed a strong bond between themselves. They both are popular for their Bromance. They have hosted couple of shows and been guest in very controversial show hosted by AIB Not much to speak about these two. Their friendship is as hard as solid rock, Unbreakable. They have till now worked together for 9 movies. Their friendship is evident  from the time when Rohit kick started his career as an assistant director for Ajay Devgn Starring Phool Aur Kaante in 1991.

On this day we wish all over members HAPPY FRIENDSHIP DAY!!