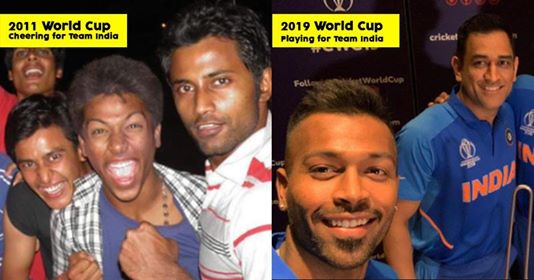 MS Dhoni lifted the world cup trophy in the year 2011 when the atomic all-rounder from Surat was just 17 years old. The Indian International Cricketer plays for Baroda in the domestic cricket, for Mumbai Indians in the Indian Premier League. Still wondering I am referring about which atomic cricketer.


For every cricketer, it’s their dream to represent their country in the most prestigious cricketing event. Hardik Panday on Friday took to his social media account and posted a merged picture of himself with his friends from the night India won the world cup back in 2011. The throwback picture shows the 17-year-old excited Hardik celebrating the World Cup triumph win of the Indian Cricket team.

Pandya wrote, From cheering and celebrating India’s World Cup triumph in 2011 to representing #TeamIndia in World Cup 2019, it has been a dream come true #cwc19.

From cheering and celebrating India’s World Cup triumph in 2011 to representing #TeamIndia in World Cup 2019, it has been a dream come true 🏆🇮🇳 #cwc19 pic.twitter.com/6fDyB29y5r

It’s the sheer hard work of Hardik Pandya which has made his dreams come true!

ICC World Cup 2019: Twitter Trolls The Official Photoshoot, Sarfraz Was Brutally Mocked For His Posture
It’s A Meme Fest On Twitter After India Loses To New Zealand In A Practice Match