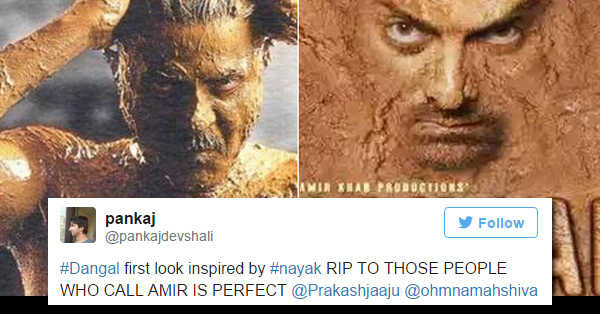 It was on Monday when Aamir Khan, Mr. Perfectionist of Bollywood unveiled the first look of his upcoming movie, Dangal. The movie is scheduled to released this Christmas, to be exact on 23rd Dec, 2016.

When last year his first poster of the PK immediate became a butt of joke, how can people not do the same this time.
Aamir Khan is known to be experimenting with his looks in every movie, so he did this time too. Dangal, Disney Studio India production, is a biopic on famous wrestler, Mahavir Singh Phogat, which is played by Aamir Khan himself.

The poster released shows the angry look of Aamir Khan, super immersed in mud, depicting a wrestling pit.
To this, people on twitter made various versions, jokes and funny posters adding humor to the entire release. However, this might have worked in the favor of making this poster of Dangal, go rounds and reach the masses.

Here are some of the funniest reactions on twitter, starting with the original poster tweeted by Aamir Khan

Brief : 'We need a groundbreaking poster for Dangal' pic.twitter.com/v4LYMFLisb

That Aamir Khan poster of Dangal seems like he has drowned in Piku's julaab.

#Dangal looks like the story of every Indian road after it has rained for 30 mins.

Guys I think Aamir Khan's face is in my chocolate ice cream pic.twitter.com/Ll5c7VQ3cC

Aamir Khan is playing Clayface in his next film, apparently. (Actually a pretty cool poster, though) pic.twitter.com/VwFZmOOvHm

Do share your views on the first look of this movie, Dangal

You Won’t Believe What Jobs These 10 Bollywood Celebs Used To Do Before Becoming Famous
Tamasha Trailer Out: Ranbir Kapoor And Deepika Padukone Are Back With A Bang