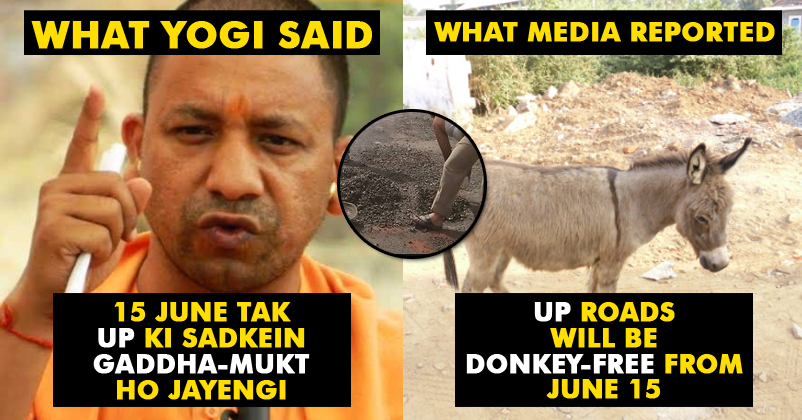 UP CM Yogi Adityanath in a public meeting at Deoria promised that he is going to make the state “pothole” free from 15th June.

“UP ki pehchaan bann chuki thi ki seema waha se shuru hogi jahaan se gaddha-mukt sadke shuru hongi,jahan se shaam ko andhera shuru hoga” (UP was known to be a place which starts with pothole ridden roads and a place where it was completely dark after sunset), he said at the meeting. And this was of course not the end as he also made great promises regarding electricity supply.

Now, this is a great step moving forward. Don’t you think? But our media is still busy bashing the CM without even understanding his words. Like most of the times, some leading media houses are busy with their misleading reports that term “gaddha (potholes)” as “gadha (donkey)”.

So while Yogi has promised pothole free UP roads, media is calling it a “donkey-free” campaign. Here are the screenshots; We all want to see India as a developed country but whenever someone tries to take a step in the right direction, media starts creating unnecessary negativity. Media has great power of influencing people but with great powers come great responsibilities. Instead of writing positively about good things, they are just busy cashing on negativity. Lack of knowledge + sensationalism has resulted in enough embarrassment for the nation and media should understand that what their job is all about.

However big media houses later corrected the news and replaced donkey-free roads with pothole-free roads but you cannot escape from Google and its search results are still showing the same mistake.

Though whatever media reports, we applaud UP government’s action towards a good change. A trip to UP would be more enjoyable now.

Whoa! India Will Have Only Electric Cars By 2030! Here’s Modi Govt’s Master Plan To Reduce Pollution
This Video Of 2 Buses Filled With Passengers Racing On Tamil Nadu Roads Is Scary