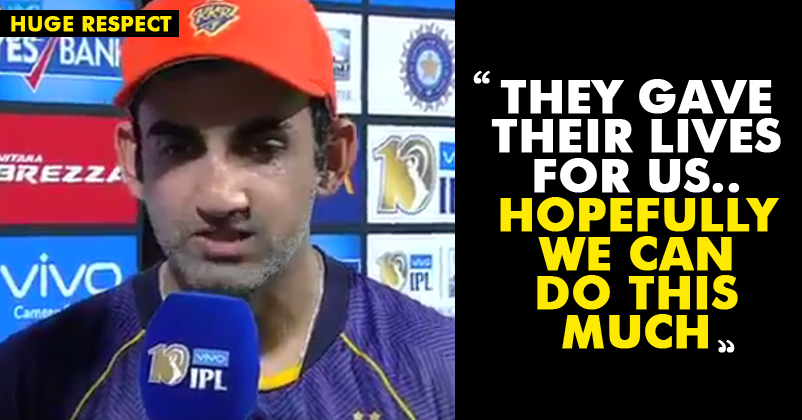 Gautam Gambhir has a huge fan following on account of his cricketing skills and now he is not just loved but also respected as a human being. He felt devastated when he heard about the killing of 25 CRPF soldiers in Sukma by the naxalites.

He took to Twitter to express his outrage as well as made a pledge to fund the education of kids of these 25 martyrs. Gautam was filled with agony after taking a look at the horrific pictures of the attack. Needless to say, he was so moved by the photos that he didn’t think for the second time before taking this step. Yesterday also, the left-hander did something which would make us respect him more. He led from the front in yesterday’s match in which KKR defeated Delhi Daredevils and Gautam scored 71 runs, not out. Gambhir was selected for the “Man-of-the-Match” award for his dashing innings and he told that he would try to help the family of martyrs by giving all the money that he would earn in IPL.

Well, this is a great gesture and we are sure that even his critics will praise him for being such a good human being.

Adam Zampa’s And His Partner Exchanged Hindi Bad Words On Instagram & It Has Surprised Us!
Disha Patani Wants To Go On A Date With This Cricketer & You’ll Be Surprised To Know The Name!