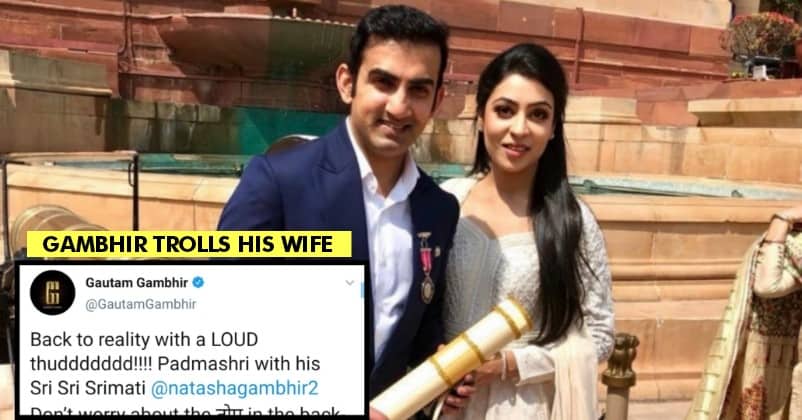 Gautam Gambhir is among the most talented cricketers of India but it is also a harsh reality that he is one of the most underrated players as well.

Recently, he was awarded Padma Shri, the fourth highest civilian award, by the President of India Ram Nath Kovind and his fans went into celebration mode. A little later, Gautam shared a photo on the micro-blogging site Twitter in which he can be seen with his wife Natasha and the award. However, what left fans in splits was the manner in which Gautam trolled his wife with the caption that he wrote while posting the pic.

First of all, take a look at the photo: 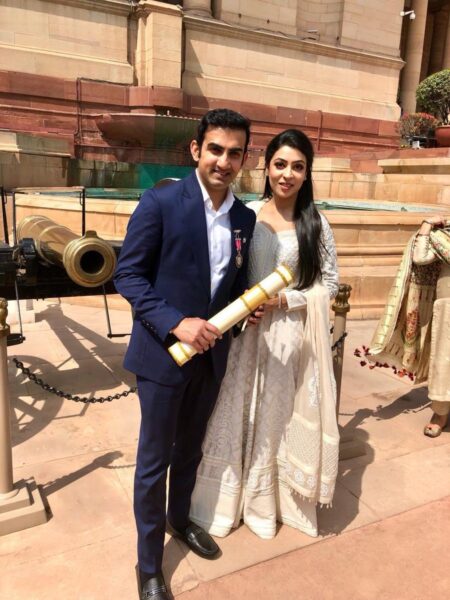 “Back to reality with a LOUD thuddddddd!!!! Padmashri with his Sri Sri Srimati @natashagambhir2 Don’t worry about the तोप (Cannon) in the background, I get fired everyday at home 🙈#PADMASHRIGAUTAMGAMBHIR #PadmaShriAward #Padmashree”

Back to reality with a LOUD thuddddddd!!!! Padmashri with his Sri Sri Srimati @natashagambhir2 Don’t worry about the तोप in the background, I get fired everyday at home 🙈#PADMASHRIGAUTAMGAMBHIR #PadmaShriAward #Padmashree pic.twitter.com/06783SvyGY

This tweet gives a glimpse of Gambhir’s humorous side as he asks his fans not to be worried about the cannon in the background because he gets fired everyday by his wife.

Twitterati loved the tweet and praised his sense of humour. Here are some of the selected reactions:

This is gold! 😂 Not sure whether to laugh or admire you both! Master in witty captions 👌🏼

lol 😂😂😂 Gauti your tweets related to marriage are always so lit 🔥🔥…Hope you are having a great time!! ♥️

This is just perfect! Both are looking extremely good! But I’m afraid of @natashagambhir2 now! 😂
God Bless you both! Lots of love to Azeen and Anaiza as well!

Padmashri with his Sri Sri Srimati please don’t fire him at home 😂❤️ This is so cute! Couple goals. Gauti your captions are always so funny! Love you loads!

Nailed it 🙏 hope sri sri srimati @natashagambhir2 will not fire you for it on this auspicious occasion.

Congratulations @gautamGambhir on getting padamshri. You are not alone in getting fired everyday at home. This is #ghargharkikahani. You are bold enough to acknowledge. Others quietly enjoy in isolation

He has also captained Delhi Daredevils (DD) and Kolkata Knight Riders (KKR) in the IPL and KKR has won the title two times under his leadership. Other than cricket, Gautam is also known for the charity work that he does and he also doesn’t mind speaking his heart out on the social and national matters.

Well, the left-handed cricketer certainly has a good sense of humor but we are not sure how his wife is going to take it. What do you say?