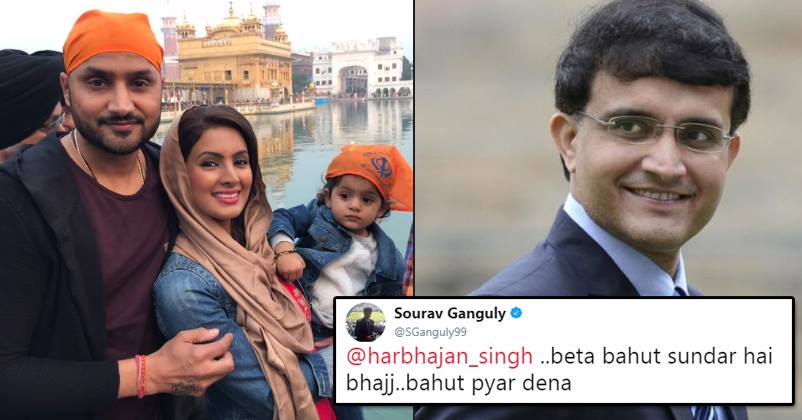 Former Indian Captain Sourav Ganguly enjoys a great rapport with Harbhajan Singh. They are good friends even off field. Often, they keep chatting on social media platforms and bring smiles on fans’ faces.

This time, Harbhajan Singh uploaded a family picture at Golden Temple on Twitter; his wife Geeta Basra and daughter Hinaya Heer looked beautiful. In short, it was a beautiful portrait and got lots of likes from his crazy fans. Sadly, Sourav Ganguly goofed up with the picture and mistook Bhajji’s daughter for a son.

This the picture that Harbhajan Singh uploaded on Twitter;

On seeing this pic, Sourav was quick to comment. Here’s what he said…

Lol, he thought Bhajji has a “Beta” and not a “Beti.” Soon, trolls started following and Ganguly realized that he had committed a BLUNDER on Twitter. He immediately rectified his mistake and left a clarification tweet. He blamed his old age for the same. Here’s the tweet…

Lol, Harbhajan Singh didn’t mind at all. He immediately left a Thank You message and totally ignored the mistake.

Dada thank you for your blessings..love to Sana.. hope to see u soon😊 https://t.co/2WXrFL9tKz

This Twitter banter was a sweet one; it shows that even though they don’t play cricket or aren’t together on field, they share a great bond.