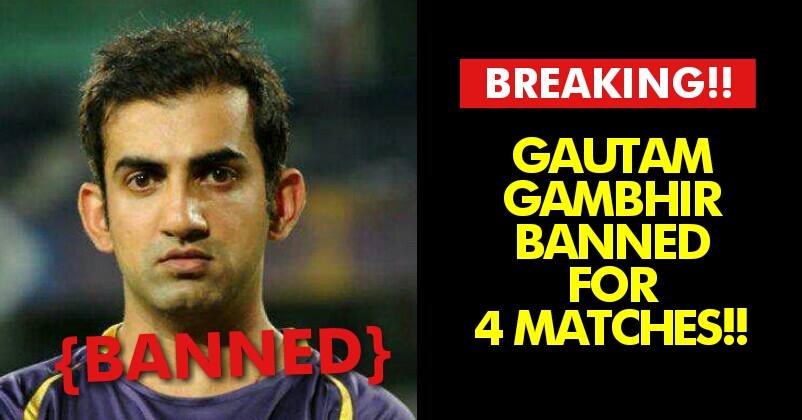 Senior Indian cricketer Gautam Gambhir is known as one of the most sensible players in the team. The former opener batsman has always maintained great balance in aggression and sportsmanship, something that has been his biggest plus all these years.

However, the idol of many, Gambhir has been handed a 4 match suspension from first-class cricket, for his ugly confrontation with Delhi Ranji coach KP Bhaskar earlier this year. As per reports, Gambhir indulged in an ugly dispute with the coach KP Bhaskar and used foul language for which hard action has been taken against him. However, Vikramjit Sen suggested to “suspend the punishment for a period of two years ending on 30th March 2019” conditional on Gambhir accepting this order and not committing any similar offence.

“Having learnt of an incident, which occurred when the team from DDCA was in Orissa, in which an altercation between Gautam Gambhir and Bhasker Pillai had transpired, and pursuant to a complaint received from Pillai, I met both persons on 10th March 2017. The matter could not be amicably and satisfactorily resolved. “

Talking about humiliation, he said,

“The Committee Members agree that considering the above facts and circumstances that have come to light, Mr Gambhir’s actions towards Mr Pillai with premeditated intent to humiliate the coach were highly inappropriate and of serious nature. It is recommended that such inappropriate behaviour requires to be penalised not only in a proportionate manner, but in a manner that has a deterrent effect so that it is not repeated and such issues are taken seriously by all team members.”

“The Committee members feel the necessity of deterrent effect of penalties on account of such seriously inappropriate behaviour to inculcate discipline within the team and in the interest of the game of cricket. Having such considerations and findings as above in mind, the Committee Members recommend that Mr Gautam Gambhir should not be allowed to play in 4 (four) First Class matches of the Delhi team at the start of the next season, i.E. 2017-18 on account of his deliberate and pre-meditated inappropriate behaviour.” The committee came hard on Gambhir for his “unruly” behaviour. The statement said-

“It is evident from the above that the actions/conduct of Mr Gambhir on 6th March 2017 against the coach and the confrontation were pre-meditated as he called for the meeting after the match at lunchtime on a day when he was not even playing the match and he had remained in the hotel, since about lunchtime.”

“It is further evident that Mr Gambhir intended to use some very sharp/inappropriate language and admittedly the arguments between the coach and Mr Gambhir were expected to be so ‘heated’ that he thought it prudent to save some of the younger players from witnessing it and therefore sent them outside the dressing room before starting the confrontation.”

Gambhir, on his part, has made multiple allegations of Bhaskar making youngsters like Nitish Rana, Unmukt Chand and Pawan Negi “insecured” and “playing with their careers”.

Acting on Gambhir’s complaints, the committee also recommended the formation of a grievance redressal forum.

As read in the statement-

“It is also recommended that disciplinary action rules and mechanism of imposing penalty are required to be formulated to inculcate discipline in the team members and for predictability and deterrence, where players know that an act of indiscipline would have serious repercussions and are therefore deterred from committing them.”

The committee observed that the position of a coach deserves respect and dignity from his players.

“The position of a coach among the team members is of high respect and dignity. It is a serious disgrace to a coach to be humiliated in front of team members by one of the team members even though if it is a senior player. The actions of Mr Gambhir, however well intended, cannot be said to be in the interest of the team, or its performance or the game as it was done on the very last day of the season and therefore could not have been any corrective effect. The actions of Mr Gambhir were not in the spirit of the game,” the statement said.”

Well, these are some really nasty allegations and a shocker for the lovers of Gambhir. What do you say?

Did Sehwag Really Send Two-Line Resume For Indian Coach’s Job? Know The Truth From Sehwag
15 Hilarious Memes Before India-Pakistan Final Match To Charge You Up!