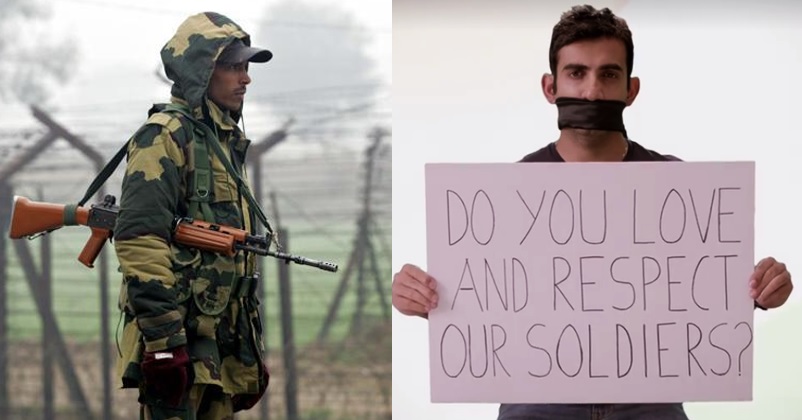 Gautam Gambhir has always stood in support of our Indian soldiers. He has a soft corner for the jawans and cannot see anything bad happening to them. Remember how he had lashed out on Twitter when CRPF jawans were attacked in Kashmir? Apart from that, he also donated his entire IPL prize money to CRPF’s Sukma attack victims. The cricketer has always respected the soldiers and so, he wants other Indians to do the same. No, he doesn’t want any monetary help from us, but wants us to show some basic courtesy.

Many a times, civilians come across soldiers but hesitate to say a “Thank You”. Don’t our jawans deserve to be thanked for protecting our nation by putting their lives at risk?

Well, Gautam Gambhir has shared a video on Twitter and it will make you realize how soldiers need to be treated.

Watch the video of his innovative campaign which is named “Remove jhijak ki patti”;

Gautam Gambhir appeals to people that whenever they see soldiers in uniform, they must leave all hesitation aside and click a selfie with them. Also, he asks everyone to make the jawans feel special by shaking hands with them.

This is the least we can do for them, right?

I will shake hands! I will salute them! I will ask them for their autograph! They are the reason we all live peacefully! Salute Indian Army!

Eye opener off the crease!

Opener at the crease..eye opener off the crease! Standing ovation to ur noble thought. Will follow ur words & make all d soldiers feel spcl.

This man has always taken stand for the right,
And always put forward his opinion, no matter what others will think 👍✌🤘👌👏 pic.twitter.com/szz8iu3A79

Incredible message GG! It's really important to acknowledge those who have been putting their lives at risk for our smiles! #Smile4Soldiers.

What an inspirational message by Gautam Gambhir! Rather than talking big about “Deshbhakti”, we all should start with these small gestures.

Indian Cricket Team Is Totally Frustrated With Coach Anil Kumble? Here’s The Reason Behind It!
Virat Gave An Amazing Response When Reporter Asked Him About His Biopic! Watch This Video!