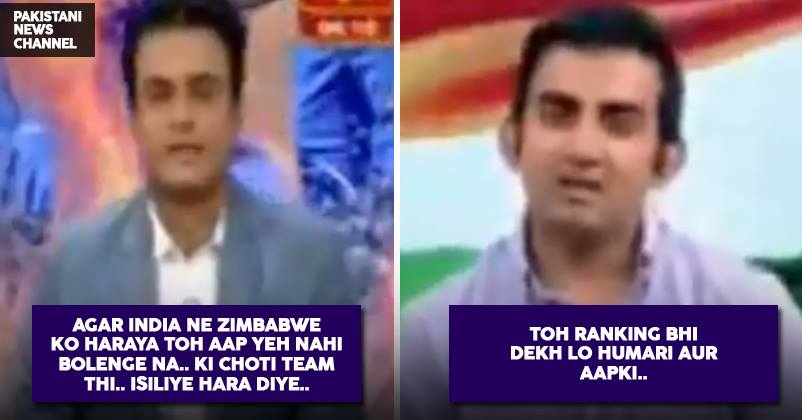 Today’s match is definitely going to be an exciting one. 2 rivals India and Pakistan will have a face off in Asia Cup today in UAE.

We all are excited for the same and can’t wait to see our team perform well once again. Many cricketers spoke about this highly anticipated India v/s Pakistan match and one among them is Gautam Gambhir.

He clearly said that conditional bans shouldn’t be accepted in Cricket. He said that if there’s a ban, then it should be applicable on all forms.

Not only this, Gautam Gambhir also appeared in a live Pakistani TV show and slammed journalists with his savage replies.

The argument took place over Pakistan questioning Indian team’s win. The journalist also said that if India defeats Zimbabwe, they will not say that they could easily defeat the team because it is a weak one. The journalist also took a dig at Gambhir for losing against England in the recent match.

To this, Gautam just gave one reply, “See your rankings and see our rankings, be it ODI or test matches”. The journalist had no reply to the same. Watch the video below;

THIS IS EPIC!!! 😂🔥
Gautam Gambhir shuts the Pakistani media with his savage replies! #INDvPAK pic.twitter.com/UAaNJ7vXJo

We loved the way how Gautam Gambhir shut Pakistani media live on TV.

Continue Reading
You may also like...
Related Topics:Gautam Gambhir, Pakistan

Journo Asked Imam-ul-Haq Whether He Also Sleeps Like His Uncle Inzamam-ul-Haq. Imam’s Reply Is Epic
Sania Mirza Shares This Tweet Before Ind-Pak Match. We Totally Agree