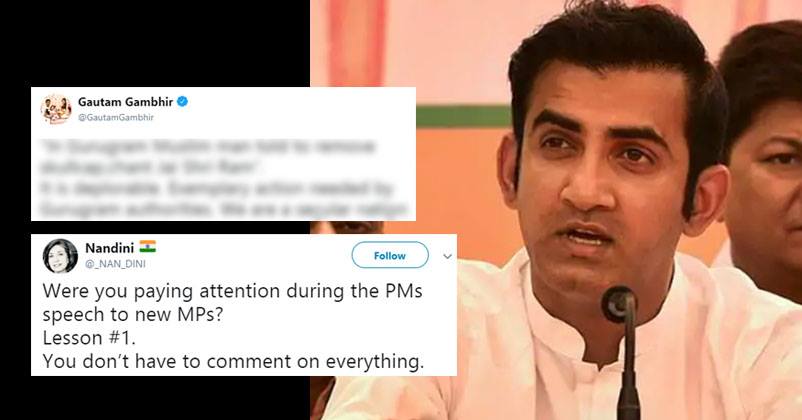 The newly elected MP from East Delhi and International cricketer turned politician Gautam Gambhir facing backlash from the netizens for his “deplorable” comment while addressing the alleged attack on the Muslim man the incident took place in Gurgaon.

On 26th May, a 25-year-old man was brutally beaten up by four anonymous youths in Gurgaon for wearing skull-cap while returning from Masjid and was forced to chant Hindutva slogans.

Gambhir promptly responded to the shameful attack and urged the authorities for strict actions against the anonymous youth. As police have registered the FIR but no one has been arrested yet. Gambhir took to his twitter handle and wrote, “In Gurugram Muslim man told to remove skullcap, chant Jai Shri Ram”. It is deplorable. Exemplary action needed by Gurugram authorities. We are a secular nation.”

The tweet created a controversy with netizens questioning Gambhir “why he was being selective by reacting to an attack on a minority community member” and he was trolled by many for his thought on secularism and demanding for strict actions against the culprits.

Even BJP Delhi Chief and North East Delhi MP Manoj Tiwari took to his twitter handle and cautioned Gambhir not to fall for any such rumours and also said Gambhir has reacted to the incident with innocence.

Actor Anupam Kher also advised Gambhir not to fall into a trap of getting popular with a section of media. It is your work that will speak. Not necessarily your statements.

Dear @GautamGambhir !! Congratulations on your win. As a passionate Indian it made me very happy. Not that you have asked for my advise but still- Don’t get into a trap of getting popular with a section of media. It is your work that will speak. Not necessarily your statements.🙏

My thoughts on secularism emanate from honourable PM Mr Modi’s mantra “सबका साथ, सबका विकास, सब का विश्वास”. I am not limiting myself to Gurugram incident alone, any oppression based on caste/religion is deplorable. Tolerance & inclusive growth is what idea of India is based on.

Shame on you @GautamGambhir you did not write an obituary for a hindu man who died of heart attack in my village..

Warning has been issued to @GautamGambhir , mind your own business, don't speak against party's agenda. https://t.co/YnWWdDKWs6

@GautamGambhir is now darling of pseudo secularists and anti-hindu lobby. Shame on @GautamGambhir, why no tweet mathura killing? I now doubt if he is planted by JNU group in BJP.

. @GautamGambhir has absolutely no idea who are the people who got him into Parliament! No wonder he was trolled. 😂 https://t.co/xjLhapMmEX

Any politician like @GautamGambhir preaching us secularism showed be abused and trolled without any mercy. We got rid of this word and these stupid guys are bringing it back

Well, Gambhir didn’t restrict himself from sharing his point of view regardless of the criticism and many lauded his tweet for calling action against perpetrators.