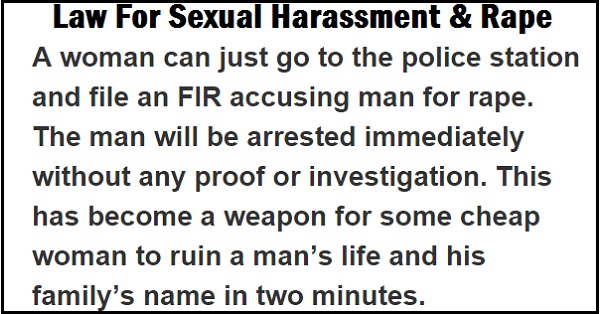 The laws are supposed to make deliver justice to it’s citizens irrespective if they are rich or poor, male or female, animal or human. But, what happens if the law itself is biased? Here are some Indian laws which are gender biased and have amounted to lot of controversies.

If a woman dies of an unnatural death within 7 years of marriage, a criminal case to be filed against the husband. If the investigation leads to any slight proof that she was being subjected to cruelty and torture for dowry by him or any of his relatives, the death will be considered murder for dowry.
Punishment- 7 year imprisonment for the husband and the relatives.

Law for sexual harassment and rape

A woman can just go to the police station and file an FIR accusing man for rape. The man will be arrested immediately without any proof or investigation. This has become a weapon for some cheap woman to ruin a man’s life and his family’s name in two minutes. This amendment was made in 2013.

This is the most draconian law ever and was referred to as- ‘legal terrorism’ by the Supreme court of India. Under this law, if a woman goes to the police station and files FIR against her husband and family, accusing them of domestic violence, they are automatically considered guilty. It would be there job to prove them self innocent or else, rot in jail. This section is non-bailable and non-compoundable. In most cases, arrests were done before investigation. However, supreme court saw the misuse and took a corrective step later- arrests to be made after magistrate’s nod only.

Now consider this scenario. Rajat and Smita are married to each other, Rohan is another person. Smita and Rohan decide to have intercourse, this is not rape or done forcefully but, purely consensual. What Smita did was adultery- had physical relation outside marriage. Though this is not a crime but is morally not acceptable and has legal consequences. The legal consequences amounting to adultery are- Rohan is imprisoned for 5 years with fine. Smita? She does not have to face a thing! Why? Because woman are not considered punishable even as an abettor.

The life long trauma that often ends in suicide

Even if the man is let off the false charges thrown at him by liars, will it be easy for him to let go of the mental trauma he went through in jail? Seeing his old parents rotting behind the bars? For facing such insult by society when he didn’t even do nothing! Justice is absolute right, but laws like these are only convenient for woman who just want to take revenge for nothing!

What do you rhink should be alternative of these laws? Tell us in the comment section.