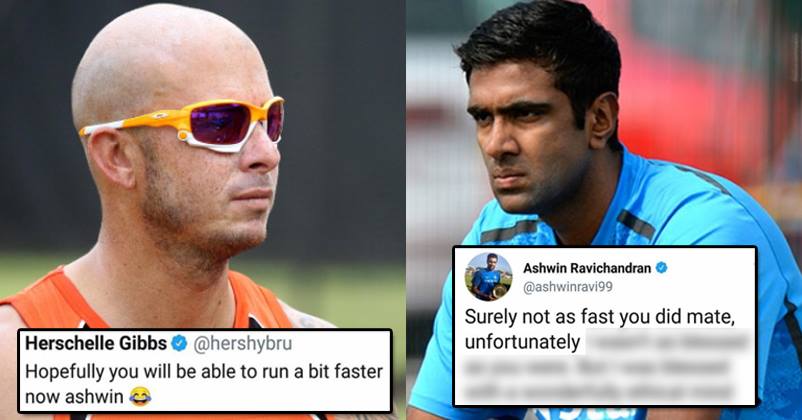 We get to see many interesting Twitter banters between cricketers often. Today, we got to see one between Herschelle Gibbs and Ravichandra Ashwin.

Well, it all started when Ashwin promoted a shoe brand on Twitter; he tweeted about the comfort the new shoe would give him and also said that they are the best running shoes. This is what he tweeted;

Hey Guys! Just got my hands on the new NIKE React. It’s got a stunning design and the foam technology used makes it light and comfortable to use. Undoubtedly, the best running shoes I’ve stepped into, can’t wait to flaunt them.
#NikeReact #InstantGo #teamNike pic.twitter.com/SmspLkw2dA

Talking about Ashwin, we know that he’s not that fast on the field. Often, we see people criticizing Ashwin for lethargy. Seeing his tweet, Herschelle Gibbs took to Twitter to poke fun at him. He took a jibe at Ashwin and said,

He said, “Hopefully you will be able to run a bit faster now ashwin 😂”

Ashwin thought of giving a befitting reply to Gibbs. He reminded him of the match fixing scandal. Gibbs was suspended and fined by South African Cricket Board for being involved in match in the year 2011. This is what he tweeted; 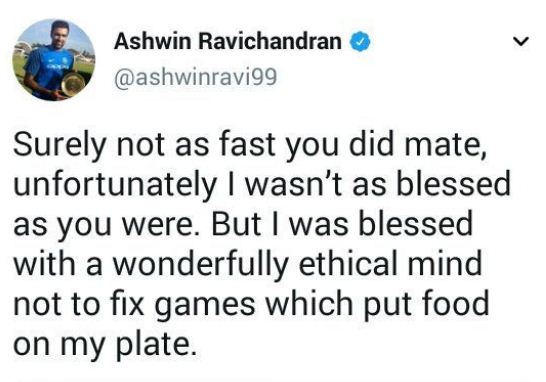 Gibbs clarified himself and said that it was just a joke.

Can’t take a joke i see😉 anyway moving swiftly on..

Even Ashwin replied that he too was joking;

I totally believed my reply was a joke too, but look how people and yourself perceived it. I am totally game for this sort of fun mate, we shall dine over this sometime.😂 https://t.co/Z7YdXQnxeD

Ashwin deleted his match-fixing tweet because it would have invited a lot hate and anger.

Jasprit Bumrah Saved A Six With High Jump But Umpire Gave A Six. Here’s Why
Ever Wondered Why Yuzvendra Chahal Wears Glasses During Fielding? This Is The Reason