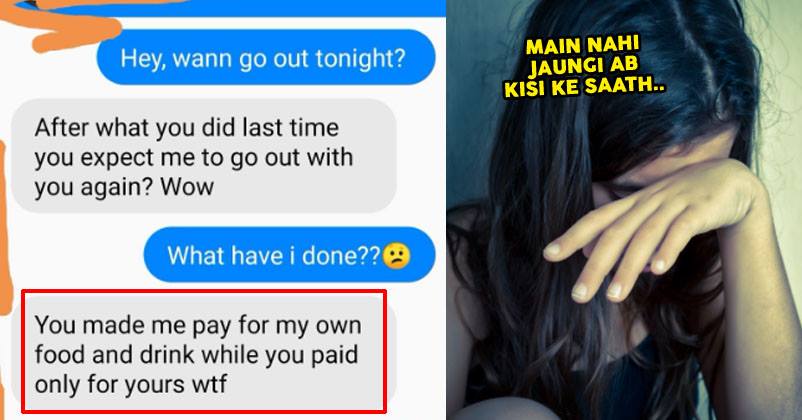 There’s a huge debate around Women Empowerment and Gender Equality. A lot of efforts are going on breaking the stereotypes but when it comes to females, no one bats an eye.

A Reddit user named CuteBananaMuffin shared an incident recently in which a girl got angry over him for not paying her bill during the date.

The user shared a snapshot of his conversation with the girl in which she’s slamming him for just paying his own bill i.e 17.50 euros and letting her pay her bill of 110 euros. Have a look at the conversation below-

Talking to a leading website, the guy told that the date was fun until she started talking about liking another guy. And finally, when it came to the bill it all went bad. She was shocked to see that he let her pay. Even though she didn’t say anything at that time, her facial expressions said it all.

The guy also said that he usually pays for both sides but he’s a student who works for 60 hrs a week to pay for food and books. He couldn’t afford to pay 110 euros equivalent to Rs 9000 and that’s why he asked her out again to make up for the last time and hoping that they can go for a cheaper place.

What’s your take on it?

Manali Has Turned Into A Snowy Paradise.You Surely Cannot Miss These Pictures.
This Woman’s Rare Illness Prevents Her From Hearing Men’s Voices, This Is So Weird