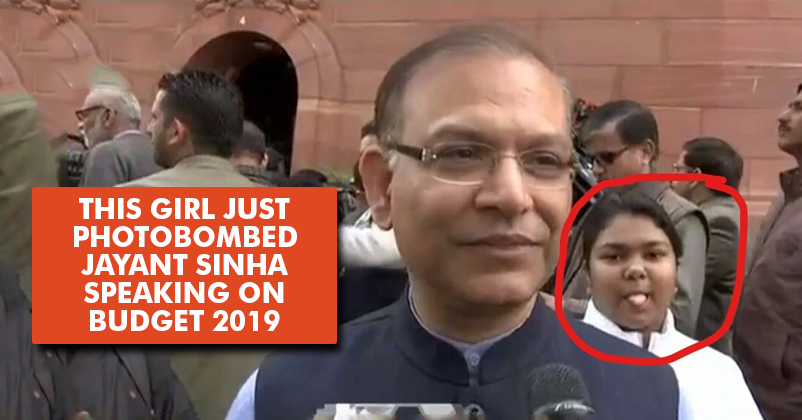 It is always fun to share and see hilarious photo bombings, especially if that involves some famous or popular person. They are unexpected and hilarious for sure.

Today, after our Finance Minister Piyush Goyal presented the Budget 2019, in our Lok Sabha, it received mixed reactions. After the session, Minister of State (MoS) for Civil Aviation, Jayant Sinha was sharing his views with the reporters outside the parliament.

He spoke about how our government is always giving the nation a good budget and thus this year was no exception as well. During this, a girl in a white sweatshirt decided to walk in and photobomb our minister.

She appeared behind him, sticking her tongue out many a times, making a very funny photobombing session.She was though well aware but in no mood to move. This video went viral and people even started comparing her with Mayavati.

Here is the video. Have a look.

Netizens can’t keep calm. They are enjoying the photobombing more than what our minister has to say. Check out these reactions.

The kid was probably there to explain 7th grade economics to Pappu ji.

Must be his daughter

Some kids are just born a legend.

Making faces at the 6th budget of this 5 yr govt too !

The kid won the day. https://t.co/2xMtIrkK0M

Lololol… Most funny pictures from the budget series https://t.co/TMd5ohXBeO

Amaal Mallik Slams Anu Malik, Says He Does Not Consider Him To Be Family.
Girls Texted Their Boyfriends ‘I Want A Baby’. You Can’t Miss The Hilarious Replies.