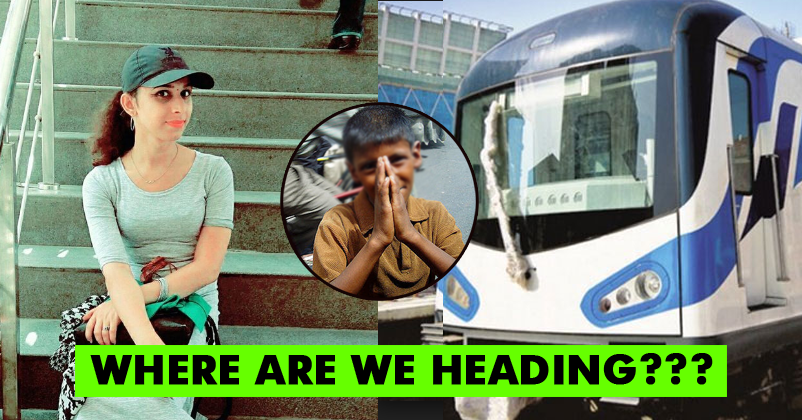 India is developing at a good pace and there are so many good things happening around us but sometimes, we witness an incident which makes us question the true meaning of development. By development, do we only mean development of infrastructure or are we also concerned with the development of moral values, humanity and humility in our attitude?

On May 1, Shivanya Pandey, a commuter of Gurgaon’s Rapid Metro, saw that 4-6 poor kids were denied entry as they were dressed in shabby and dirty clothes; however, they had the required money to pay for their fare. She posted the whole incident on her Facebook wall:

“4-6 beggar kids have been Denied entry in rapid metro station just because they were dressed shabbily and sweating even though they were paying fares still guards denied their entry.

To what extent, we as a human will stoop and judge everyone?? I’m feeling bad, wish I could do something but I’m helpless too.

Our nation is developing rapidly but leaving people behind. Development of country isn’t equal to development of citizens, that’s my great India and Indian government.

This nation has no place for Transgender, LGBT, poor, Backward classes. My country is not for its people. I’m sometimes ashamed seeing such incidents happening around yet government talking about development.” Well, this is really pathetic to be true, isn’t it?

The kids were advised to go by auto but with such dresses, there was no chance that they would get entry. Shivanya got frustrated and shared the incident with the Minister for Women & Child Development, Maneka Gandhi.

Widespread Sensitization is required to curb incidents of discrimination against poor children. #DelhiMetro /1

A Facebook Post stated that few poor children were not allowed to board a Metro Train even though they had tickets. #DelhiMetro 2/ pic.twitter.com/AperjITTvE

I’ve written to Shri Mangu Singh, MD, #DelhiMetro Rail Corp Lt., to look into the matter & ensure that such incidents are not repeated. 3/

She also reported it to the authorities but they asked for a proof. Shivanya has no proof, as it is difficult to click photos or shoot at metro stations but she states that CCTV footages can act as the proof of the incident.

On the other hand, Rapid Metro totally denied these allegations and claimed that kids were sent back as they didn’t have enough money for the ticket. There spokesperson said, “They were politely asked to go because they did not have the money for the fare.” When Shivanya was asked about Rapid Metro’s response, she said that CCTV recordings should be watched to bring out the truth in open.

What do you have to say with regard to the article? Share your views in the comments section below.

Swachh Survekshan 2017! Full List Of 434 Cities Is Out & You Need To Check The Ranks Right Away
Politicians & Journalists Are Loving Supreme Court’s Decision On Nirbhaya Case! Check Tweets!