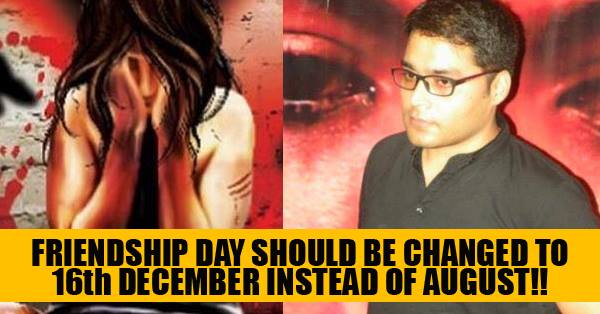 “Friend in a need is a friend indeed” – This quote sums up the relation of friendship completely, a friend is one who is with you when you need him and makes all the efforts to help you.

Awindra Pratap Pandey, is one person who can actually be set as an example for a true friend. If you are not able to recognize this person, then let us tell you that he is the same person who tried to save his friend from the six rapists who used iron rod to beat him and also inserted the iron rod in the private parts of the girl and then threw them out of the bus for dying on the road, almost without any clothes.

Yes, we are talking about the Nirbhaya case which was all over in the news when it happened and it is again taken up for  discussion on its anniversary, every year. Have you ever tried to know what this guy has gone through since then? Here’s a Facebook post by Neha Bajaj that you can’t miss to read in this connection:

“Two years and 10 months ago in-front of his eyes his girlfriend was brutally raped by six bastards in a running bus of Delhi.

He fought till the time he was beaten blue with an iron rod.

They broke his leg, robbed him, snatched his mobile & left him almost naked..

He fought till the time he could. Then on that chilling cold night he was thrown from the running bus along with his girl friend.

They were naked, drained, exhausted & both were bleeding for different reasons.

He tried to stop passing cars & kept on begging for a piece of shawl to wrap his naked girl friend & finally he got it after 40 minutes.

Then he took her to the hospital, admitted her, called the police,called her parents & did every possible co-operation that a true friend should do in the hour of need.

He could have fled from the bus – he did not.

He could have left her on the road – he did not.

He could have claimed fame & money ( as the father of Nirbhaya who took Rs 25 lakhs from UP CM, a job for his son & many more from many people in his daughter’s name ) – but he did not.

He could have claimed his treatment money from Govt – he did not.

He could have become the most frequently seen face in the electronic media in exchange of money – he did not.

If this is not friendship then what is friendship??

When the entire country roared for the girl no one thought what this boy had gone through that night.

He is not a film star or a cricketer.

He is Awindra Pratap Pandey, a boy from Gorakshapur in UP, the boy who loved his girl from the core of his heart.

When this boy is there somewhere in anonymity, why we Indians should celebrate Friendship Day on 3rd August to copy the Americans??

We should celebrate Friendship Day in India on 16th December to salute the spirit of Awindra who proved what friendship means.

Let 16th December be the official Friendship Day in India.

Am I talking sense??

If yes then please share this & give your opinion here..”

Do you agree with her? Share your views with regard to the article in the comments section below.

5 Bollywood Celebs Who Once Went Bankrupt
The Great Khali Left Without Any Charge, Even After Killing A Wrestler