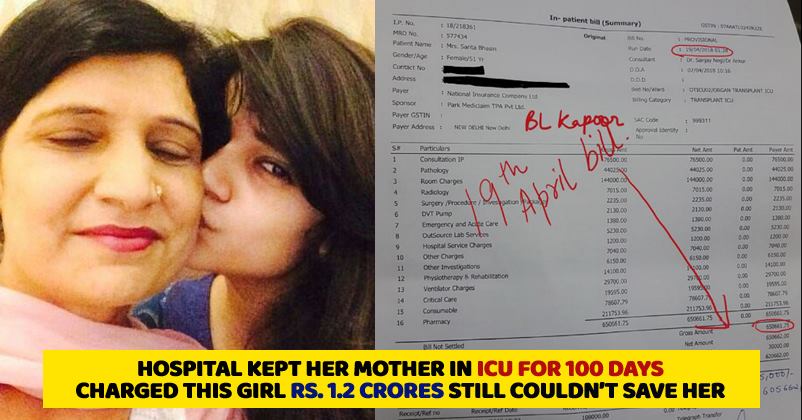 Doctors are considered as God on Earth as they have the capability of not only curing a person but also saving his/her life. However in the present times, as many doctors have been found guilty of illegal activities such as organ trafficking, gender determination, etc., the faith on doctors has decreased to some extent.

In fact, it won’t be wrong to say that the big hospitals are no less than 5-star hotels and they charge exorbitantly from the patients and doctors play an important part in milking the patients for cash.

A Facebook user Parul Bhasin Verma took to the social networking site to narrate her and her family’s ordeal which they have gone through for the last 4 months. In the beginning of January, Parul’s mother fell sick due to ammonia attack and it was later found that she was suffering from Liver Cirrhosis which is the last stage of liver disease as her liver stopped functioning. 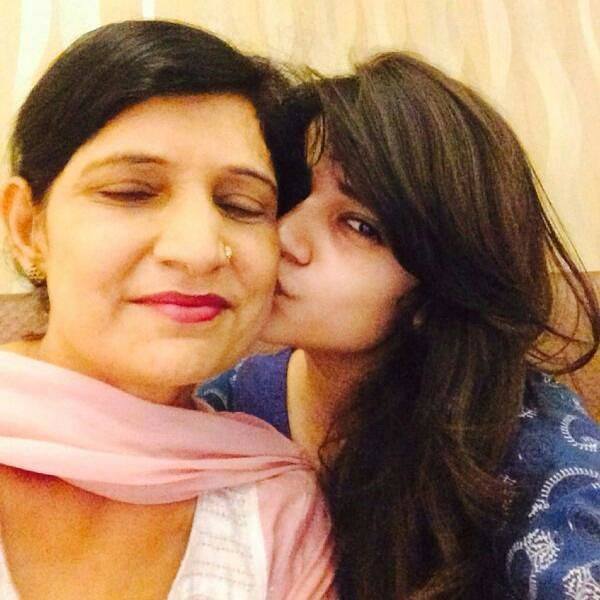 Parul talked about the irresponsible behavior of doctors and staff of two hospitals – BL Kapoor, New Delhi and Yashoda Hospital in Secunderabad, Telangana (Hyderabad). She told how they tried out to churn out money from them without providing proper treatment and how they harassed them for paying the bills and purchasing medicines from their dispensary at high prices rather than buying it from outside at low cost.

She termed it as “medical kidnapping” and said that they have spent nearly Rs 1.2 crores on her mother’s treatment who took her last breath on May 7, 2018, due to multiple organ failure despite successful liver transplant. Parul also told that her mother was kept in ICU for nearly 100 days by these hospitals and they charged them Rs. 1 lakh per day for this purpose. Her family is under huge debt now and nobody in the government is listening to her plea.

This is her Facebook post in which she has explained everything in detail. She also tried a lot to get in touch with the heads of state government and national government but as no help received from them, she shared it publicly.

“I want to share the story of my family that has experienced “medical kidnapping” where my mother was admitted in the hospital ICU for more than 100 days during which the two private hospitals namely Yashoda Hospital in Secunderabad,Telangana (Hyderabad) and BL Kapoor, New Delhi asked us to pay an average of around 1 lac per day with total bill running to more than 1.2 crores. My mother contracted multiple infections and ultimately succumbed to them.

At this point I have reached out to several news channels like Aaj Tak, Zee News, News 24 and the honorable CM and Health Minister of Delhi and the Indian PM, but I have not received any help or support in the matter. I have no other option now but to go public with this information so that appropriate action can be taken against these so called hospitals, established to help the ailing members of our society and no other family goes through the horror that we have experienced for over 4 months. Please find below the events that occurred over a period of 4 months:

January 02, 2018: My mother was admitted to BL Kapoor hospital, New Delhi after an ammonia attack and diagnosed with Liver Cirrhosis (end stage of Liver disease with non-functioning liver).

January 12-13, 2018: a lady named Jyotsna Verma (link to her website: http://www.indialivertransplant.com/…/jyotsna-verma-liver-t…), claimed to make a liver available to us in a very short time. Total cost estimated: Rs 23 lakh.

January 16, 2018: Ms. Jyotsna called us to inform about a liver from deceased patient being available at Yashoda hospital, Secunderabad. She charged us Rs. 1 lakh for the information shared.

January 16, 2018: My parents flew to Hyderabad and were given a cost estimate of Rs. 27 lakh. The doctors at Yashoda Hospital would quote a fee from Rs. 24-29 lakh to the different patients for a liver transplant.

February 08, 2018: She was put on ventilator because of a lung infection. She was on ventilator for around the next 30 days and would be unconscious most of the time. During this period the hospital charged us an average of Rs 1 lakh every day in addition to the initial charge of Rs. 27 lakh.

Around March 10, 2018: After paying around Rs. 60 lakh to the hospital, my father said that all his savings were gone and he had acquired substantial debt. To our surprise, the next day my mother was conscious and started to recover.

Around March 13, 2018: When we had no money left, the doctors started asking us to discharge her as she only required nursing care. We decided to bring her back to Delhi, spoke to the doctors at BL Kapoor hospital who told us that they would only keep her for a day in the hospital to monitor her condition.

March 27, 2018: We moved our mother to New Delhi and admitted her to BL Kapoor Hospital. Since we were in debt, we had an arrangement that allowed us to buy cheaper medicine from outside. During all this time knowing we are out of money they kept harassing us. Mr. Praveen from accounting department at the Yashoda hospital threatened to stop my mother’s treatment if we don’t pay them.

April 05, 2018: In spite of my mother not having recovered, the doctors forced us to take her home straight from the ICU.

April 07, 2018: In the morning she had to be admitted again to BL Kapoor Hospital due to her having breathing issues. BL Kapoor hospital only admitted my mother on the condition that we would purchase the medicine from the hospital pharmacy at a premium price of 2-3 times the wholesale price. During this time the hospital forced us to pay around 1 lakh per day. The doctors were very rude, especially Dr. Sanjay Singh Negi, who is the head of the Liver transplant team.

April 20, 2018: My mother developed Jaundice on a Friday evening and doctors from Yashoda Hospital in Hyderabad recommended the doctors in Delhi to immediately install a stent in her liver to prevent the spread of jaundice in her body as she had a similar problem while she was in Hyderabad. But for the doctors in Delhi, their weekend was more important and they delayed the installation of the stent to Monday afternoon (April 23). During this delay the infection spread across her body, caused multiple organ failure.

April 24, 2018: When doctors realized that my mother’s health deteriorated beyond cure, they forced us to pay for medicines and medical procedures before they would perform them. They kept on performing kidney dialysis almost every day on a person who was practically dead, in an attempt to make more money.

During the whole debacle which spanned over 4 months, my family spent close to Rs 1.2 crore to fill the pockets of these greedy hospitals and doctors who only cared about their leisure, ego and profits. Today my family has lost its core member at the age of 51, all our life’s earnings have gone away and we are in tremendous debt, due to the greed that drives these so called establishments which have been setup to serve ailing members of our society.

As a citizen of our country whose family has gone through hell and has been victimized during the toughest time of our life, I feel that it is my duty to bring our story to your notice, to seek your support, to fight for justice so that no other family goes through such pain. I don’t request your pity but only request your support in my effort to make our society a little better than what it is today.”

Below are the photos of bills as shared by Parul on Facebook: 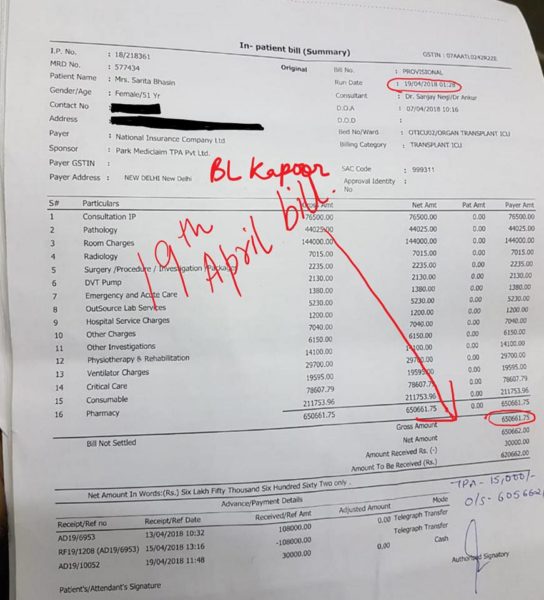 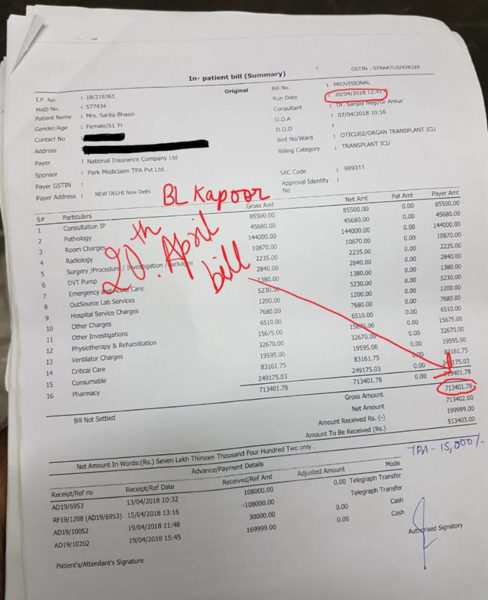 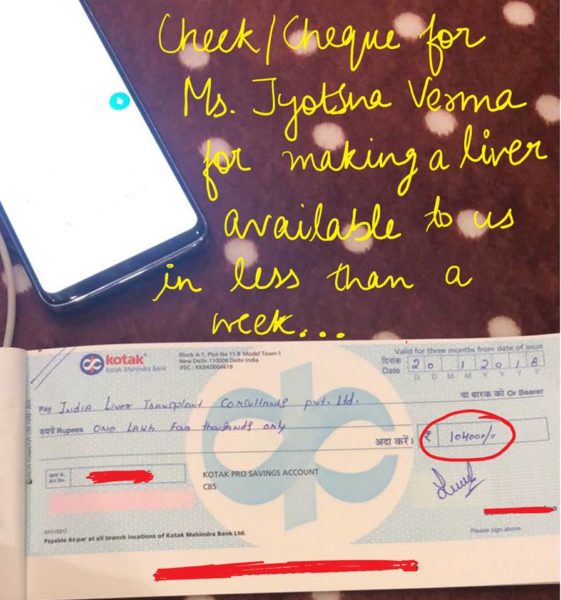 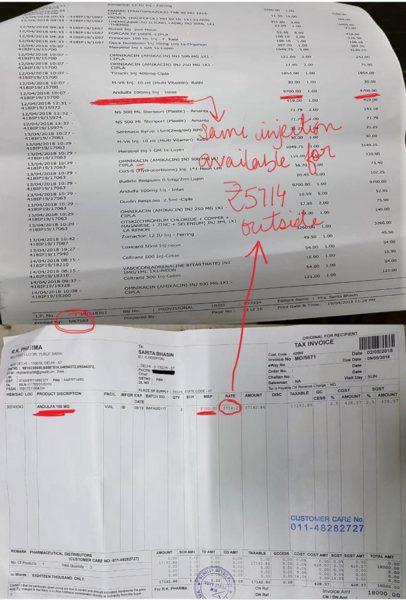 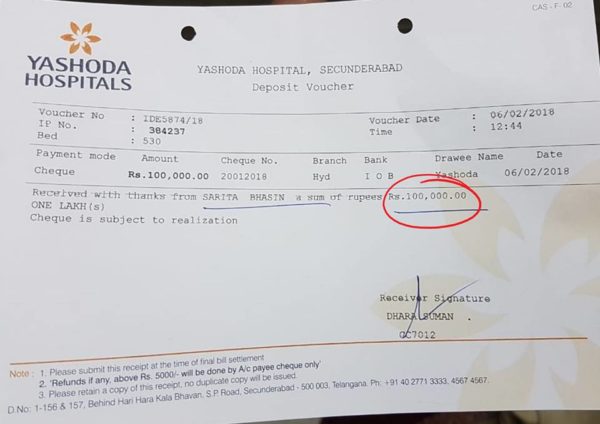 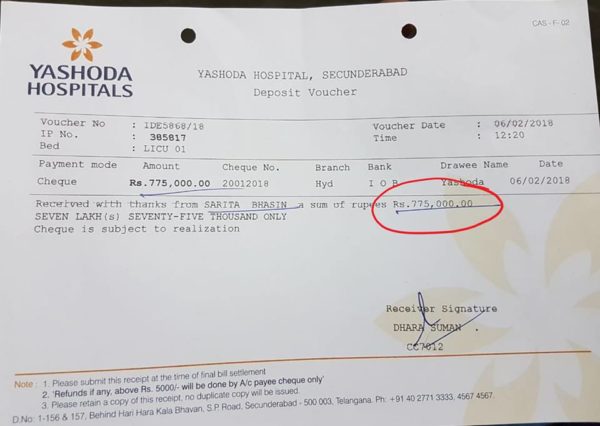 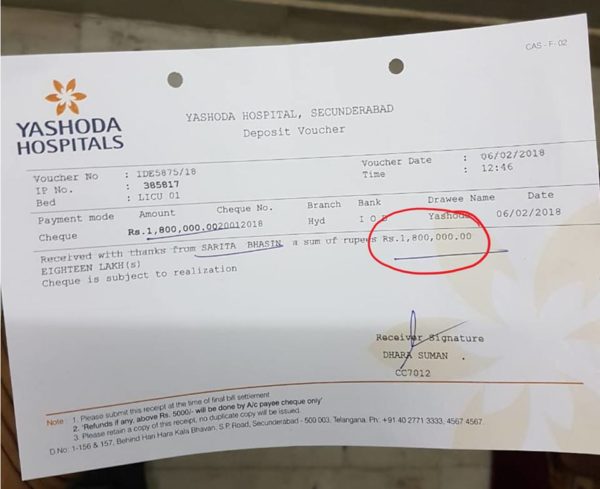 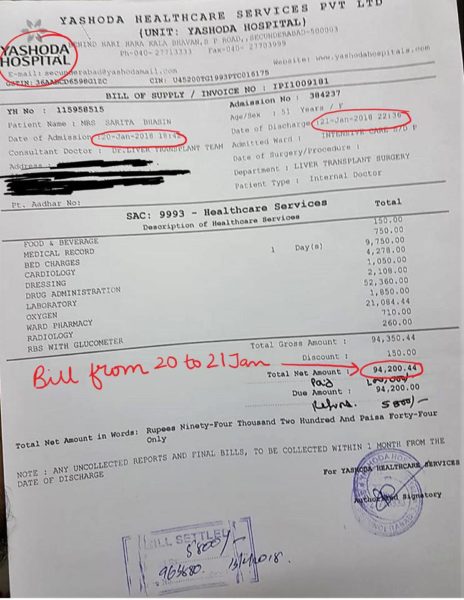 The government should take strict measures to make sure that nobody gets to play like this with a human life and those who break the law should be severely punished.

Russian President Putin Says Russian Women Can Sleep With World Cup Tourists
This Girl Wishes Eid Mubarak To Boys By Giving Them A Hug. There Is A Big Line