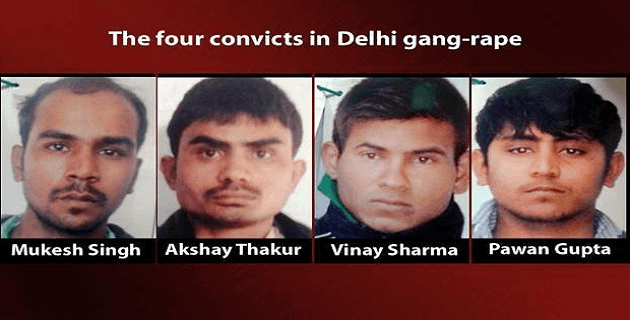 It’s been 3 years but still the Nirbhaya bus gang rape strikes our minds and hearts. What more tragic is that even after the strong twitter outcry for the wrong doing by in numerous people and the candle light vigil, the culprits have no repents over the crime they have committed. It’s a big question mark to the society; are women safe? And the answer is a ‘NO’, not at all. The 23 year rape victim who was dubbed Nirbhaya by the media was allegedly raped in Delhi in December 2012 by six cruel men in a mini bus when she was and her male friend offered a lift in that same bus by them. She was brutally raped by an iron rod. She could not fight her injuries anymore and died because of huge internal damages, or you can say she was murdered by the rape convicts. But still, in spite of so many protests, one of them is open enough to say that the girl is more responsible.

According to Mukesh Singh, Nirbhaya had received the fatal degree of violence because she and her friend had tried to fight back. Here’s what he said:

“When being raped, she shouldn’t fight back. She should just be silent and allow her to get raped. Had she be silent, we would have dropped her home safely and she would have been alive today.”

“You can’t clap with one hand – it takes two hands.”

He also added “a decent girl must not roam on the streets of the city after 9, she should not wear wrong clothes and should not go to dics and bars. Girls are meant to do household work and if she crosses her limits she may get raped and in that case she should allow to rape her silently.” According to him only 20 percent girls are right.

What happened to the society?!

And few people of the society are making them comment so as they are saying that you need two hands to clap. Added to it his lawyer AP Singh quoted as saying, “If my daughter or sister engaged in pre-marital activities and disgraced herself I would not spare her rather i would certainly take this sort of sister or daughter to my farmhouse, and in front of my entire family, I would put petrol on her and set her alight.”

India can only have advertisements of tea and coffee saying “jago India jago” or like that not actually the sleeping conscience of the people.