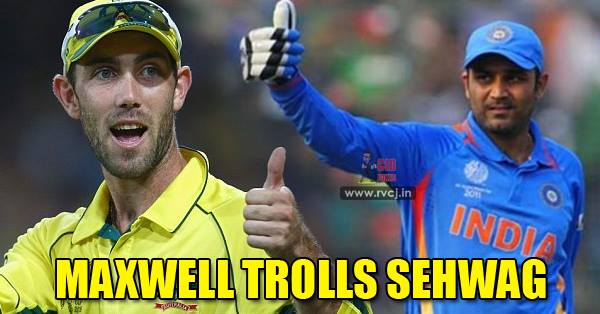 The Indian cricket team tasted its third consecutive defeat at the hands of Australian team and Glenn Maxwell played an important role in his team’s victory. He scored 96 runs on 83 balls in the match played at Melbourne Cricket Ground on Sunday.

At one time, Australia was 215/6 but Maxwell with Faulkner assured his team’s victory by scoring 87 runs in partnership. Indian bowling and fielding have been disappointing throughout the series and the flop show was repeated in the third match again.

Maxwell got out on 96 when he was trying to play a big shot when Australia needed just 1 run in the remaining 9 balls, missing out on his century.

The 27-year old cricketer has been compared to Indian batsmen like Sachin Tendulkar and Virender Sehwag for his batting style; in fact Sehwag has called Maxwell ‘positive and humble’.

Sehwag and Maxwell both are extremely talented and play cricket with a carefree attitude which is highly enjoyable for the audiences but sometimes, the team gets disappointed due to their early dismissals.

When media persons questioned Maxwell whether he is a distant cousin of Sehwag, he replied in a lighter tone, “I have more hair than Sehwag.”

He was not upset with missing out the century, he further added, “Didn’t care where the ball went, just wanted to hit it over the infield, whether it went for one, two or four.”

He wanted to play in the same manner so that people forget calling him nicknames like ‘The Big Show’, as he said, “I’m hoping for some more innings like that. People might start to forget about the nicknames and that sort of thing.”

Maxwell played an important innings in second ODI too and helped Australia in winning the match, along with George Bailey.