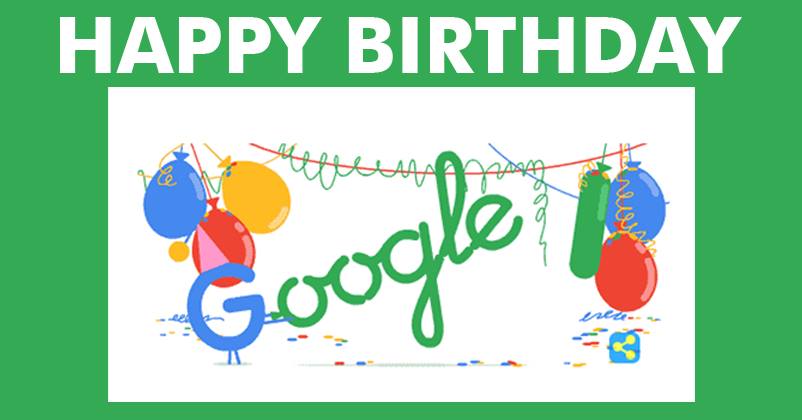 Happy 18th Birthday Google; we love you and just can’t imagine our lives without you!

Think of those days, when your teachers used to give you the toughest projects in school and you had just one and only friend to help you with every possible information ‘GOOGLE’.

Now, on this occasion Google has turned the party mode on, with its special birthday doodle, and is ready to celebrate with its beloved users.

Well, there seems to be a lot of confusion with regards to the exact birth date of Google. Yes, no one is sure as to how old it actually is! Google had at least 3 “Turned 18” birthdays already.

Google.com i.e. the domain was registered on 15th of September 1997 and if we follow this, then it is 19 years old.

Although the domain was registered in 1997, the company had started an year back i.e. 1996, which means its’ Google’s 20th birthday.

When Google became a company!

Google had used the date 27th of September in the year 2013, which showed it turned 17. So Google was suppose to turn 18 in 2014 but they didn’t turn. Then again in 2015 they were 17. Google even admitted that they actually don’t know when is their birthday. Even in 2002, the birthday was celebrated on 27th September.

Now, if we go with the above calculations, Google has celebrated 18th birthday thrice i.e. once in 2014 (As per 1996 date), once in 2015 (As per 1997) and then again in 2016. Not only this, Google is super-lucky to celebrate 4 birthdays in a month i.e. 4th September (As per Filing of the corporation), 7th of September (Becoming a company) and then 15th of September (As per domain registration). This is the 4th time in a month that Google would celebrate its 18th birthday!

1. In 1998 This Logo was used in Stanford University Graduation Project by Sergey Brin and Larry Page

2. On 30 August 1998 The Team Created the First Doodle headed by Burning Man

3. In September 1998 Google moves to google.com and Released to the Beta to the World

4. In May 1999 Google got a playful logo which was more Sophisticated look based on Catfull Typeface

5. In 2010 after 10 Years The Logo Brightened up and sports a Reduced Shadow Drop compared to last one

6. In September 2013 The Logo got Flat with some Typographical Tweaks

7. In September 2015 The Logo becomes a Part of new Family that includes Google Dots and “G”

Continue Reading
You may also like...
Related Topics:A Look Back Into The History of Google Logo!!, Google, History, LOGO, Look Back

This Amazing Place In India Has NO Politics, Money & Religion! Unbelievable But True!
MNS Issued Strict Warning To Karan Johar! Says “Cast Pakistani Actors & See What We Do”