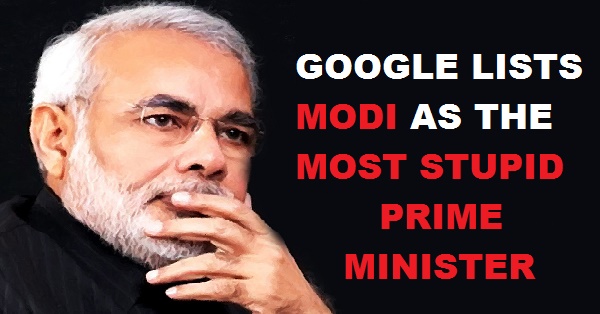 There has not been many days when Google listed Indian Prime Minister Narendra Modi in the category of Top 10 Criminals and here’s again a blunder from Google. This time Google has enlisted Modi as The Most Stupid Prime Minister, God knows why! As we all know that Modi is making utmost efforts to make India a better place to live and improving its condition by employing various means. In fact, Indian PM has been featured on TIME Magazine’s cover page too which intended to project his vision for India.

If we refer to the viewpoint of a large majority of Indians, they are of the opinion that Modi is certainly counted among the nation’s best PMs; however, don’t know what issue Google has with him that he always entitles him under offensive categories which are truly objectionable on the part of Indians.

Earlier, it enlisted Modi as one of the Top 10 Criminals of the world for which Google apologized too later. But again this time, pictures of Modi are shown in the category of The MOST STUPID PRIME MINISTER. Along with Modi, there are few others too including Abhisit Vejjajiva, the Ex-PM of Thailand as well as New Zealand’s PM John Key.

Below is the screenshot of this search: What are your views over the matter? Don’t you think Google should have a better team if such kinds of mistakes are happening over and over again. We understand that Google has automated search algorithm and this could be because of some higher ranking site using this terminology but Google should keep a manual check on such things. We really don’t need to tell how many Modi lovers exist in India!! I too am one of them!!

What do you think about it? Share with us in the comments section below.

Salman Khan To Donate Profits From BAJRANGI BHAIJAAN To Needy Farmers!!
“I Really Didn’t Want To Have Him In The Car”, Says SUPERMOM After Delivering Baby In A Moving Car