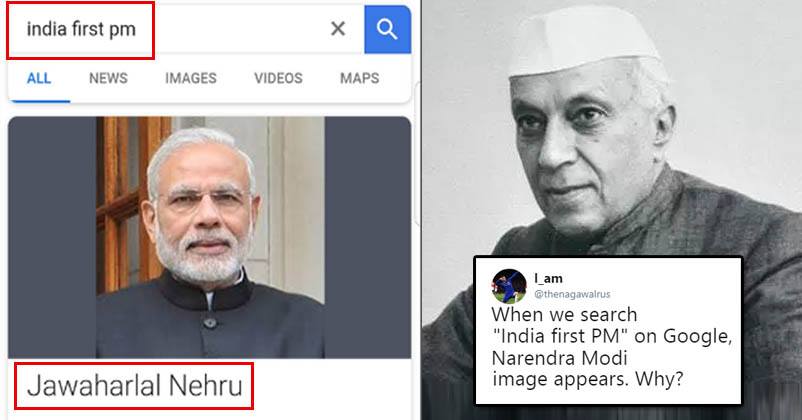 Google seems to be obsessed with the Indian Prime Minister Narendra Modi and that’s why, it loves to use his photo at just any place. Earlier we have seen that Google listed PM Modi under the category of Top 10 Criminals and then it categorised him as the Most Stupid Prime Minister. Even though Google apologised for both the blunders, he then showed PM Modi’s image with the name of Jawahar Lal Nehru when a person searched for “India’s first prime minister”. 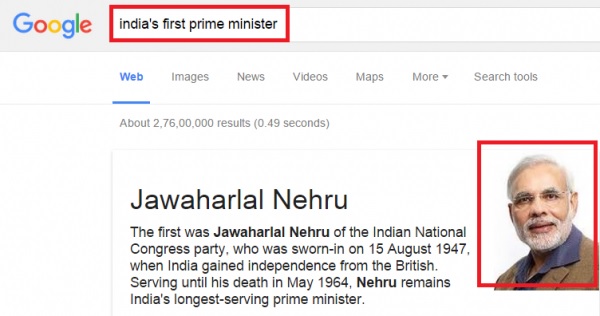 This happened in 2015 and now once again Google seems to have committed the same blunder or rather we should say technical glitch.

The error came to light when someone typed “India first PM” on Google and the result displayed name of Jawahar Lal Nehru with the photo of Narendra Modi. 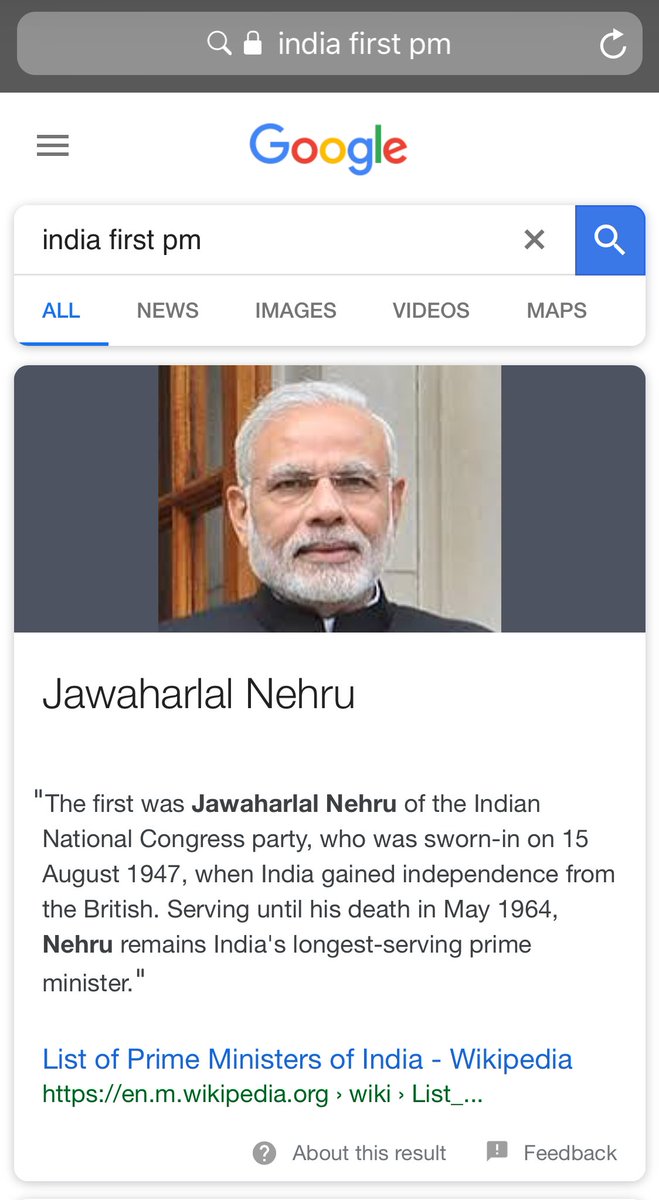 The error seems to have been rectified now; however, Twitter was flooded with queries when users got this result. Check out some tweets:

.@Google @GoogleIndia what algorithm of yours allows this?! You’re so full of junk- pic.twitter.com/GHyxh3fEWm

Type 'India first pm' in google and result is Mr.Narendra Modi's photo instead of Pt. Jawaharlal Nehru. @Google Pls correct it.. How come you also fell in the trap of Mr.Modi? pic.twitter.com/H8zlP9zzW0

When we search "India first PM" on Google, Narendra Modi image appears. Why?

The largest search giant Google has chosen to remain mum on this matter as of now and it can be pretty possible that it may be a technical glitch that showed the first photo of the Wikipedia page, “List of Prime Ministers of India”, however when it opens completely, it clearly tells that Narendra Modi “is the current (14th) Prime Minister of India, since 26 May 2014”.

A user tried to explain it and here’s what he tweeted,

1. Google is serving up a Wikipedia page on the topic, “List of Prime Ministers of India – Wikipedia”

2. The first image on the Wikipedia page is of Narendra Modi, PM.

3. When displayed on a narrow screen, the image comes up first.

Can the lady NOT understand this?”

Sigh..
1. Google is serving up a Wikipedia page on the topic, "List of Prime Ministers of India – Wikipedia"
2. The first image on the Wikipedia page is of Narendra Modi, PM.
3. When displayed on a narrow screen, the image comes up first.
Can the lady NOT understand this? https://t.co/wuQqMCbWx4

Well, we don’t know whether this answer is correct or not but all is well since Google has corrected the mistake.

Google this is falsifying information on the nation's First PM of India. Whoever has done this change in algorithm within Google needs to be taken action. It is a loss at greater extent to first time learners about India first PM on the internet worldwide.

In fact they have a well developed algorithm. It picks up the key words most accurately. India First- PM. The PM who puts India First. Well done, Google. You answered just right!!

Actually It is because PM Modi Is the First Best PM of India, sometime things can be understand itself…

Even Google is afraid of being called 'hater'.

Even Google is ashamed of displaying the picture of beloved chacha as first PM of country.

“I Cancelled My OLA” Row Takes New Turn. Twitter Is Making Fun With These Hilarious Memes
Ameesha Shared A Pic In Torn Jeans; People Compared Her Jeans With Pocha & Called Her Beggar